The Damage Done: A Novel (Hardcover) 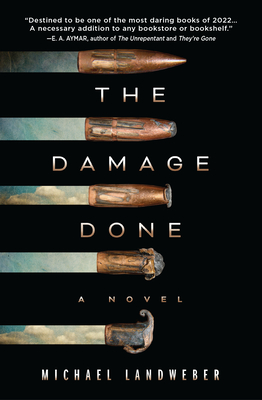 The Damage Done: A Novel (Hardcover)


On Our Shelves Now at:
For fans of Ben Winters and Sarah Pinsker, this mind-bending and thought-provoking novel pushes the limits of fiction, questioning the violence sewn into our DNA.

Violence is a thing of the past—but do new horrors lie in wait?

Imagine a world devoid of violence—a world where fists can’t hit, guns don’t kill, and bombs can’t destroy. In this tantalizing novel of possibility, this has—suddenly and inexplicably—become our new reality.

The U.S. president must find a new way to wage war. The Pope ponders whether the Commandment “Thou Shalt Not Kill” is still relevant. A dictator takes his own life after realizing that the violence he used to control his people is no longer an option.

In the first days after the change, seven people who have experienced violence struggle to adapt to this radical new paradigm: Dab, a bullied middle schooler; Marcus, a high school student whose brother is the last victim of gun violence in America; Ann, a social worker stuck in an abusive marriage; Richard, a professor whose past makes him expect the worst inthe present; Gabriela, who is making a dangerous border crossing into the U.S.; the Empty Shell, a dissident writer waiting to be tortured in a notorious prison; and Julian, a white supremacist plotting a horrific massacre. As their fates intertwine, the promise and perils of this new world begin to take shape.

Although violence is no longer possible, that doesn’t mean that some among us won’t keep trying. Mindless cruelty is still alive and well—and those bent on destruction will seek the most devious means to achieve it.
Michael Landweber lives and writes in Washington, DC. He is the author of the novels The In Between, We, and Thursday, 1:17 pm. His short stories have appeared in literary magazines such as Gargoyle, Fourteen Hills, Fugue, Barrelhouse and American Literary Review. He is anAssociate Editor at Potomac Review and a contributor for the Washington Independent Review of Books.
Praise for The Damage Done:
“A utopian fantasy that actually feels good.”
—Kirkus

“The Damage Done is a fine work, one that forces us to consider how we’d respond were physical violence to end.”
—Washington Independent Review of Books

“Michael Landweber asks all the right questions . . . The result is a trenchant, uncompromisingly intelligent thought experiment.”
—The Sunday Times

“Michael Landweber has written an intriguing novel questioning what life could be like if, in a mere day, direct personal violence became impossible. With intense imagery and heart-tugging characters, the author maps the globe upon which people are freed from that most primal of fears: bodily harm. This fascinating story will keep you reading, wondering what its people will dare to accomplish; and it will urge you to wonder, too, what you might be capable of, what boldness you might find, if you knew no one could physically hurt you.”
—Catherine Wallace Hope, award-winning author of Once Again

“Mike Landweber's wide-ranging cast of characters submerges us in a realm where violence no longer exists. Thought provoking, engaging, and powerful, this novel invites us to hope for a better, though still imperfect, world."”
—Susi Wyss, author of The Civilized World

“In this wildly inventive novel, Michael Landweber paints a portrait of a world where physical violence is impossible, but humans still find ways to hurt. It’s a sweeping story about connections, love and loss, second chances, and redemption that will linger in readers’ minds long after they turn the last page.”
—Tara Laskowski, author of The Mother Next Door and One Night Gone

“Deeply imaginative, and shifting from unsettling to inspiring in just a few sentences, Michael Landweber's The Damage Done is destined to be one of the most daring books of 2022. Stories intertwine with subtlety and skill, and Landweber brings complexity to his characters with deceptive ease. A necessary addition to any bookstore or bookshelf.”
—E.A. Aymar, author of The Unrepentant and They're Gone

“The Damage Done takes a fascinating premise and weds it to equally fascinating characters. More than that, though, in depicting a world without violence, it brings into focus how difficult it is to strip violence from our own imaginations and from the stories we tell. There are characters in this book's nonviolent world who cannot stop seeking to impose violence on others, and instinctively, as a reader, I found myself wishing to see those characters come to violent ends. This might be the book's most surprising achievement: the way it compels us not only to reconceptualize violence but implicates us in it.”
—Kevin Brockmeier, author of The Illumination

“A grim and socially resonant novel set against a Twilight Zone backdrop, The Damage Done shines a light on the darkest parts of humanity while simultaneously offering hope to readers and mankind alike. There's much to cherish here.”
—Ronald Malfi, author of Come with Me