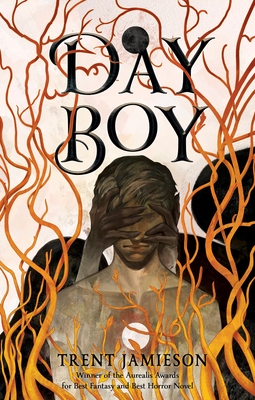 They worship the Sun: the only god as cruel as they are.

The Masters, dreadful and severe, rule the Red City and the lands far beyond it. By night, they politic and feast, drinking from townsfolk resigned to their fates. By day, the Masters must rely on their human servants, their Day Boys, to fulfill their every need and carry out their will.

Mark is a Day Boy, practically raised by his Master, Dain. It’s grueling, often dangerous work, but Mark neither knows nor wants any other life. And, if a Day Boy proves himself worthy, the nightmarish, all-seeing Council of Teeth may choose to offer him a rare gift: the opportunity to forsake his humanity for monstrous power and near-immortality, like the Masters transformed before him.

But in the crackling heat of the Red City, widespread discontent among his fellow humans threatens to fracture Mark's allegiances. As manhood draws near, so too does the end of Mark's tenure as a Day Boy, and he cannot stay suspended between the worlds of man and Master for much longer.

With brilliantly evocative, hypnotic prose, Trent Jamieson crafts a fang-sharp and surprisingly tender coming-of-age story about a headstrong boy—and the monster who taught him to be a man.

Trent Jamieson is a multi-award winning Australian novelist and short story writer. He is the author of The Stone Road, the Death Works series, and the Nightbound Land duology. When he’s not writing, Trent works as a bookseller at Avid Reader in Brisbane.

“At the fingertips of a gifted writer there will always be new and interesting takes on the vampire tale and happily, Day Boy is one of them. . . . At times touching, at times frightening, and always interesting. The ideas are fresh and new, and by the end of the novel there is still so much left to be said.” —Melbourne Review of Books

“Jamieson has kept all of the central facets of vampire mythology while fashioning something new and often riveting. Poetic and meditative—at times frightening, visceral and bloody—this is a dark journey worth making.” —Aurealis

“Dry, rolling heat flows from the page in waves of long days and even longer nights. . . . A poetic story of humanity, of monsters living in the Shadow of the Mountain, bitter cold and open to the burning of the clear night sky.” —Fantasy Book Review