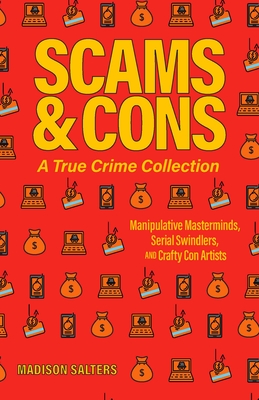 
Coming Soon—Pre-Order Now
Take a deep dive into the manipulative, messy world of con artists, embezzlers, fraudsters, swindlers, and grifters in this collection of true crime stories about scams and cons.

From mystifying cons to shocking scams, Scams and Cons: A True Crime Collection features case file facts, fascinating details, and true testimonies of the world’s most famous scammers and con artists. This book includes the most salacious cases as well as lesser-known ones, with each chapter delving deep into the facts of the case and chronicling first-hand accounts from journalists and police. Plus, a bonus trivia chapter at the end includes a variety of extra-fascinating tidbits. From cults of personality to murderers, cases include:


A perfect gift for fans of shows, films, and documentaries like Inventing Anna, Bad Vegan, The Tinder Swindler, The Dropout, Dirty John, and more.

Madison Jayne Salters has been a writer, journalist, editor, and translator in news and across literary publications for over a decade. Her storytelling sits firmly at the intersection of ethics, education, and investigation. As a polyglot who's worn many hats (all of them wide-brimmed), she has worked alongside the UN in Istanbul, written a play for audiences in Paris, won entrepreneurship awards in London, translated documentaries from Japanese, and penned comics in the United States. Her heart will always be with her two dogs and her partner, even though all three try to eat her ice cream.