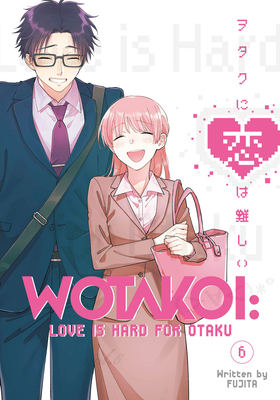 This is book number 6 in the Wotakoi: Love is Hard For Otaku series.

A tall, quiet gamer boy and a geeky girl whose life revolves around yaoi manga are old friends, but when they start working in the same office, they decide to date. It's a relationship of convenience at first, but could it become something more? This manga comedy is now a hit streaming anime!

THE TRUE END, OR JUST THE BEGINNING?

Narumi slips up in front of her work friends, and the anxiety of outing herself as an otaku forces her to retreat inward. While Hirotaka is quick to console her, a difference in opinion devolves into an argument. Will the couple learn to grow past this obstacle? Maybe sage advice from bickering experts Hanako and Taro can help? Meanwhile, Naoya and Ko might need some guidance of their own as they take their first steps together as a couple. The conclusion of these intertwining, nerdy love stories awaits!

Fujita rose to fame as an amateur artist, posting comics on the Japanese Pixiv sharing service. Wotakoi: Love Is Hard for Otaku is her professional manga debut in Japan.