The Capital of Basketball: A History of DC Area High School Hoops (Paperback) 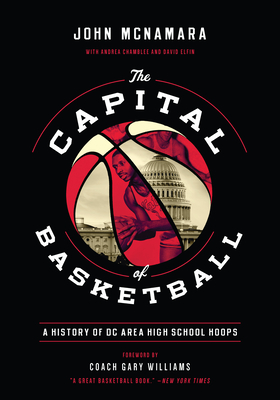 The Capital of Basketball: A History of DC Area High School Hoops (Paperback)

In The Capital of Basketball, John McNamara offers the first-ever comprehensive look at the great high school players, teams, and coaches that make the DC metropolitan area second to none in its contributions to the game. This fascinating, highly-illustrated history is perfect for basketball fans or anyone interested in Washington, DC history.

Gary Williams (Naismith Hall of Fame inductee 2014) began his coaching career as a graduate assistant for the Terrapins in the fall of 1968, after playing at the University of Maryland. The young coach moved up the coaching ranks taking positions at American University, Boston College, and Ohio State before returning to Maryland to start the decade of the nineties where the Terrapins captured the program's first ever NCAA national championship in basketball. Williams won more than 600 games in his career at four different universities, but for the coach who played at Maryland and returned to his alma mater more than 20 years later, victory never tasted so sweet as that 2002 championship.