Canadian Military Intelligence: Operations and Evolution from the October Crisis to the War in Afghanistan (Hardcover) 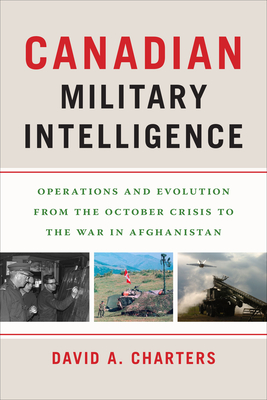 Canadian Military Intelligence: Operations and Evolution from the October Crisis to the War in Afghanistan (Hardcover)

By David A. Charters

Canadian intelligence has become increasingly central to the operations of the Canadian Armed Forces (CAF). Canadian Military Intelligence: Operations and Evolution from the October Crisis to the War in Afghanistan is the first comprehensive history that examines the impact of tactical, operational, and strategic intelligence on the Canadian military.

Drawing upon a wide range of original documents and interviews with participants in specific operations, author David A. Charters provides an inside perspective on the development of military intelligence since the Second World War. He shows how intelligence influenced key military operations, from domestic internal security to peacekeeping efforts to high-intensity air campaigns--including the October Crisis of 1970, the Oka Crisis, the Gulf War, peacekeeping and enforcement operations in the Balkans, and the war in Afghanistan. He describes how decades of experience, innovation, and increasingly close cooperation with its Five Eyes and NATO allies allowed Canada's military intelligence to punch above its weight. Its tactical effectiveness and ability to overcome challenges reshaped the outlook of military commanders, and intelligence emerged from the margins to become a central feature of military and defense operations.

Canadian Military Intelligence offers lessons from the past and critical implications for future intelligence support with the creation of the Canadian Forces Intelligence Command. This book will be essential to both intelligence history and military history readers and collections.

David A. Charters is a senior fellow of the Milton F.Gregg Centre for the Study of War and Society and a retired professor of military history, both at the University of New Brunswick. He coauthored Kandahar Tour: The Turning Point in Canada's Afghan Mission.