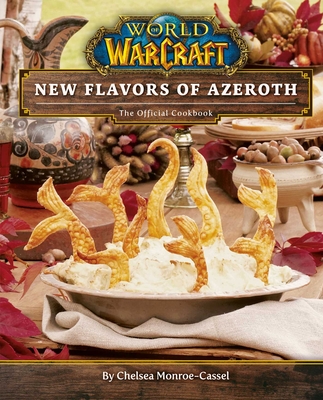 
Special Order—Subject to Availability
Noted Pandaren chef Nomi is your guide through the culinary world of Azeroth in this follow-up to World of Warcraft: The Official Cookbook.

Journey through Azeroth and prepare to feast on new culinary delights inspired by this officially-licensed World of Warcraft cookbook.

In this cookbook, Pandaren chef Nomi has collected the best recipes gathered during his travels and will instruct you in everything you need to know as you feast your way through Azeroth. As a young boy in Pandaria, Nomi answered the beckoning call of the Cooking School Bell and quickly grew into a promising chef. Through the years, this intrepid cook has traveled across Azeroth, learning countless regional recipes and techniques from Pandaria, the Broken Isles, and even the mysterious Shadowlands. Each chapter features easy-to-follow dishes, as well as numerous tips on how to not burn your food. Let culinary expert Nomi be your guide in World of Warcraft: New Flavors of Azeroth.
Chelsea Monroe-Cassel is the coauthor of A Feast of Ice and Fire: The Official Game of Thrones Companion Cookbook and the author of World of Warcraft: The Official Cookbook, Hearthstone: Innkeeper's Tavern Cookbook, and The Elder Scrolls: The Official Cookbook. Her work is a synthesis of imagination and historical research. This passion has led her to a career of transforming imaginary foods into reality. She greatly enjoys foreign languages, treasure hunting, history, and all things related to honey.
"This cookbook would be fun for anyone no matter how they are in the kitchen. It offers plenty dishes and drinks across several skill levels. As an added bonus, if you have the first Warcraft cookbook — World of Warcraft: The Official Cookbook­ — it offers pairing options across both for a fuller experience." - Blizzard Watch
— Blizzard Watch