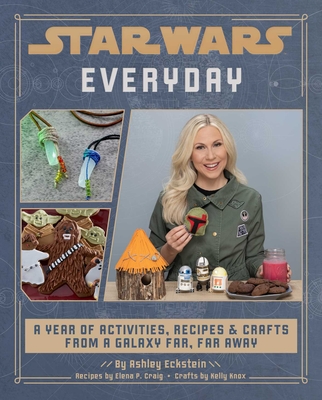 By Ashley Eckstein, Kelly Knox (With), Elena Craig (With)


Not On Our Shelves—Ships in 1-5 Days
Join Ashley Eckstein and live your best Star Wars life, with this 12-month guide to party planning, crafting, and cooking inspired by a galaxy from far, far away!

She may be the voice of Ahsoka Tano on Star Wars: The Clone Wars, but first and foremost, Ashley Eckstein is a lifelong fan of the Star Wars galaxy—a passion that led her to start the fangirl fashion brand Her Universe, and become a pillar of the Star Wars fan community. Now, you can celebrate your fandom with Ashley, as she shows you how to bring Star Wars into your everyday life, with this unique lifestyle book!

CELEBRATE STAR WARS WITH ASHLEY ECKSTEIN: This book is a delightful exploration of Star Wars fandom from one of the galaxy’s most positive and inspirational fangirls.

THE ULTIMATE LIFESTYLE BOOK FOR STAR WARS FANS: Ashley herself guides you through crafting projects, recipes, mindfulness exercises, and party planning ideas that are fun and accessible for Star Wars fans of any age.

YEARLONG ACTIVITIES: Designed to be used throughout the year, this book features family friendly activities that are organized by monthly themes, such as Hope, Friendship, and Adventure.

PERFECT FOR YOU AND YOUR PADAWAN: A great gift for families obsessed with Star Wars, this book is a fantastic way to create engaging galactic adventures for both parents and children.

COMPLETE YOUR STAR WARS COLLECTION: This book stands alongside fan-favorite titles such as Star Wars: Knitting the Galaxy and Star Wars: Galaxy’s Edge: The Official Black Spire Outpost Cookbook.
Ashley Eckstein has been widely recognized and honored as an actress, entrepreneur, author, designer and influencer. Most known as the voice of Ahsoka Tano in Star Wars (Star Wars: The Clone Wars, Star Wars Rebels, Star Wars: The Rise of Skywalker), Ashley founded Her Universe in 2010 - the groundbreaking fangirl fashion and lifestyle brand. Ashley is an accomplished actress with numerous film and television credits to her resume. She is also an in-demand host and inspirational speaker for major studios, networks and Fortune 500 companies. In 2022, Ashley will be extremely busy hosting, producing, writing and starring in new videos and stories for the Disney company. Ashley is best known as a trailblazer with a powerful voice in the fandom community, and she uses her voice as a passionate advocate for mental health awareness and is a champion for the Nationwide Children's On Our Sleeves movement.

Kelly Knox is an entertainment and pop culture writer in the Seattle area. She’s a frequent contributor to official websites for franchises like Star Wars, DC Comics, Marvel Comics, and Funimation. She also creates original DIY and craft projects for all ages for StarWars.com and Star Wars Kids’ Let’s Make Star Wars. Kelly is the author of Marvel Monsters: Creatures of the Marvel Universe Explored and Star Wars: Be More Obi-Wan.

Elena Pons Craig is a food and prop stylist and recipe developer with more than 25 years of experience in culinary design, marketing, photography, and publishing. With a deep love for pop culture, she enjoys hiding Easter eggs in depictions of fictional worlds.  With her husband and two children, she has developed superhero cooking skills that cross generations, genders, and genres.