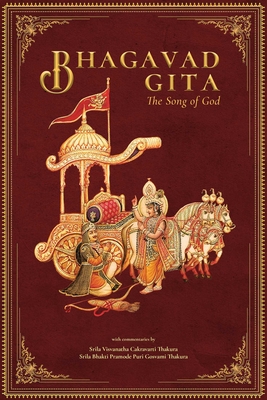 
Special Order—Subject to Availability
“One who sings and chants these supremely confidential teachings to My devotees will attain supreme devotion for Me and will attain Me. There is no doubt in this matter.” —Sri Krishna, Bhagavad-gita 18.68

If sharing the confidential meaning of the yoga of devotional love, bhakti-yoga, is the standard for spiritual advancement, then this is the definitive edition of the Bhagavad-gita.  It is the first English translation that includes summaries of the commentaries of four of the most prominent expounders of the tradition of bhakti-yoga: Srimad Bhaktivinoda ?hakura, Srimad Visvanatha Cakravarti Thakura, Srila Bhakti Pramode Puri Gosvami, and Sri Kanailal Pancatirtha—alongside the highly acclaimed translation of the text itself by Srila Bhakti Rakshak Sridhar Dev Gosvami. Taken together, no other edition of this sacred text has so comprehensively conveyed the timeless spiritual wisdom of the Bhagavad-gita.
Swami B. P. Puri (1898–1999), born in Ganganandapur in Jessore district (present-day Bangladesh), dedicated his life, spanning over a century, to the service of his guru. He was the founding Acharya of the Gopinath Gaudiya Math. His writings reflect the disciplined eye of a scholar who expresses profound scriptural conclusions with grace and directness. He taught and exemplified the spiritual concept of pure devotion, or Krishna bhakti, as expressed within the Gaudiya Vaishnava tradition.