My Reminiscences of the Anglo-Boer War (Paperback) 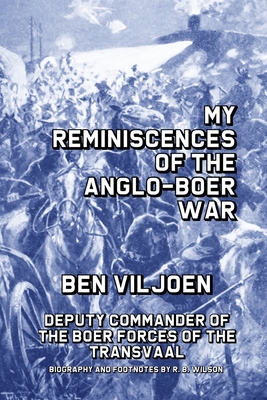 My Reminiscences of the Anglo-Boer War (Paperback)

New edition with an eight-page biography of the author, and more than 60 footnotes explaining events, personalities and phrases to the present-day reader.

General Ben Viljoen was one of the most important figures of the Second Anglo-Boer War of 1899-1902, but because of his exile and refusal to return to South Africa after the war, is one of the least-known figures from that conflict.

As deputy commander of the whole Boer army of the Transvaal, Viljoen played a pivotal role in coordinating and carrying out the guerrilla war which eventually forced the British government to deploy an army more than twice the size of the entire Boer population.

Viljoen started the war as a divisional leader, but his ability was soon recognised, and despite his youth, quickly rose through the ranks. Viljoen describes in this book his part in the early campaigns in Natal-when the Boers seemed on the brink of victory-and then their ignominious retreat following the critical strategical failures of the Boer command.

Forced back into their homelands and overwhelmed by superior numbers, the Boer armies then dispersed and fought a hard, two-year long, guerrilla war.

The struggle to stay alive, to avoid British detection, the methodology of the guerrilla war, their defeats and their victories, are all told with a surprising high humour, despite the overall grimness of the tale.

Viljoen's memoir also contains a unique element: he describes his imprisonment on the island of St. Helena during the last four months of the war.

This edition also contains a new biography of the author, which provides a fascinating account of Viljoen's adventures after the war. This included his forced exile in America, where he set up a colony of Boer exiles in New Mexico, and his last adventure: participation in the 1911 Mexican Revolution on the side of the man who became the next president of Mexico. It also contained ten rare photographs, in addition to the 13 original illustrations and 8 maps.