London to Ladysmith via Pretoria (Paperback) 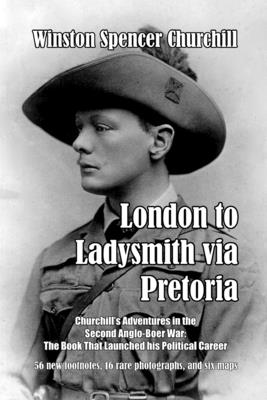 London to Ladysmith via Pretoria (Paperback)

This is the book that launched Winston Churchill's political career, and therefore one of the most important he ever wrote. With 56 new footnotes explaining terms, events and personalities to the present-day reader, 16 new rare photographs, six maps, and a full index.

Winston Churchill's first-hand account of the first five months of the Second Anglo-Boer, from 1899 to mid 1900, and the daring adventures described therein, effectively launched the author's political career by turning him into a national hero in Britain.

Initially sent out to South Africa as a correspondent for the Morning Post newspaper, the young Churchill placed himself at the very front line, embedding himself with the British troops then fighting a large Boer invasion of the colony of Natal.

The events quickly took on a dramatic turn: the armoured train which the author was accompanying on patrol was attacked and derailed by a Boer commando. Slightly wounded in the hand by Boer fire, Churchill was taken prisoner by the Boers, despite his protestations that he was just a journalist.

Taken to Pretoria, he was interned along with British officers in a specially prepared prison in that city's center. His dramatic escape from that prison, and how he, all alone, made his way back to British lines via Mozambique and Durban, became a wildly popular story in Britain, and allowed him to launch his political career upon his return home.

However, this book also contains much other detail of the struggle faced by British forces in the opening stages of the war. Having joined up with the South African Light Horse unit, the author then took part as a soldier journalist in the ongoing conflict. In that capacity, he provided eye-witness accounts of all the major battles of the time, including Spion Kop, which ended in an ignominious British defeat.

Finally, Churchill relates how he took part in the first British relief column to reach the besieged town of Ladysmith, winning further acclaim for himself and helping to turn the tide of the war in Natal. From there, he was to return home to popular acclaim-and to be elected to Parliament for the first time.

A gripping personal account which has lost none of the its flair and sense of adventure, and vital reading for anyone seeking a greater understanding of the politics and attitudes of that tumultuous period of history.