The Messenger: Moderna, the Vaccine, and the Business Gamble That Changed the World (Hardcover) 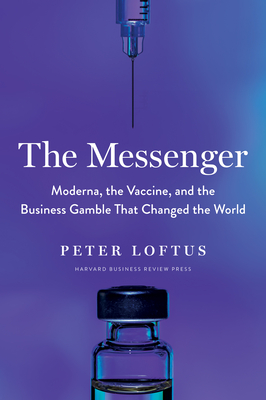 The Messenger: Moderna, the Vaccine, and the Business Gamble That Changed the World (Hardcover)

The inside story of an unprecedented feat of science and business.

At the start of 2020, Moderna was a biotech unicorn with dim prospects. Yes, there was the promise of its disruptive innovation that could transform medicine by using something called messenger RNA, one of the body's building blocks of life, to combat disease. But its stock was under water. There were reports of a toxic work culture. And despite ten years of work, the company was still years away from delivering its first product. Investors were getting antsy, or worse, skeptical.

Then the pandemic hit, and Moderna, at first reluctantly, became a central player in a global drama--a David to Big Pharma's Goliaths--turning its technology toward breaking the global grip of the terrible disease. By year's end, with the virus raging, Moderna delivered one of the world's first Covid-19 vaccines, with a stunningly high rate of protection. The achievement gave the world a way out of a crippling pandemic while validating Moderna's technology, transforming the company into a global industry power. Biotech, and the venture capital community that fuels it, will never be the same.

Wall Street Journal reporter Peter Loftus, veteran reporter covering the pharmaceutical and biotech industries and part of a Pulitzer Prize-finalist team, brings the inside story of Moderna, from its humble start at a casual lunch through its heady startup days, into the heart of the pandemic and beyond. With deep access to all of the major players, Loftus weaves a tale of science and business that brings to life Moderna's monumental feat of creating a vaccine that beat back a deadly virus and changed the business of medicine forever.

The Messenger spans a decade and is full of heroic efforts by ordinary people, lucky breaks, and life-and-death decisions. It's the story of a revolutionary idea, the evolution of a cutting-edge American industry, and one of the great achievements of this century.

Peter Loftus writes about the pharmaceutical industry and health care for the Wall Street Journal. Based in Philadelphia, he covers large drugmakers, biotech firms, and the latest developments in drug research and innovation. He has followed Moderna and the wider chase for a Covid-19 vaccine from their start. He is part of a Journal reporting team that was a finalist for the Pulitzer Prize.Follow Peter Loftus on Twitter @loftus.