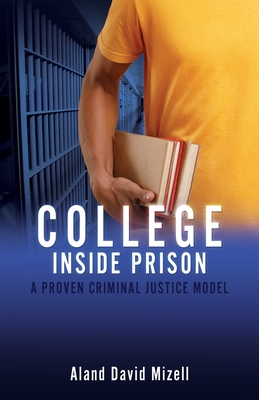 
Not On Our Shelves—Ships in 1-5 Days
A Proven Criminal Justice Model Direct and powerful prisoner testimonies by successful graduates of College Education Behind Bars (CEBB) breathe undeniable life into this remarkable story about the power of hope and the possibility of redemption. Confronted with an overcrowded jail overflowing with hopeless brothers and sisters, Dr. Aland Mizell conceived of CEBB as a light to shine into darkness. Making that light a reality required to seek out and create effective partnerships with government officials, criminal justice agencies, and forward-thinking university administrators. CEBB's academic courses and mandatory recovery program offer prisoners a realistic hope for transforming themselves into productive members of their families and communities, heightening success at reentry and lowering the chance of recidivism. The author calls for replication of this academic and rehabilitative initiative across the Philippines and the passage of a a Second Chance Act. "College Education Behind Bars is a symbol of hope in the era of mass incarceration. Through this innovative higher education program, Dr. Aland Mizell offers purpose to PDL, preparing them for release and demonstrating that education that should be available even to those behind bars - it's a gateway for second chances especially for those desiring a better future." Dr. J. Prospero "Popoy" de Vera III, Chairman, Commission on Higher Education, Office of the President, Republic of the Philippines "The College Behind Bars program that Aland Mizell built in the Davao City Jail is essentially a miracle: a thoroughly developed and incredibly organized education program in one of the most challenging settings I have ever laid eyes on. It is testament to what is possible when we truly believe in the power of education to change the world." Dr. Baz Dreisinger, professor at John Jay College of Criminal Justice, founder of Prison-to-College Pipeline, executive director of the Incarceration Nations Network, and author of Incarceration Nations: A Journey to Justice in Prisons Around the World Aland David Mizell, founder and COE of College Education Behind Bars as well as Minority Care International, earned his master's degrees in political science and public administration and a doctorate in political science with an emphasis on minority politics. He reads and speaks several languages adding to the breadth of his research on alternatives to violence, incarceration, and hopelessness. He is an American social entrepreneur and scholar, living in the Philippines.