Taking on the Plastic Crisis (Prebound) 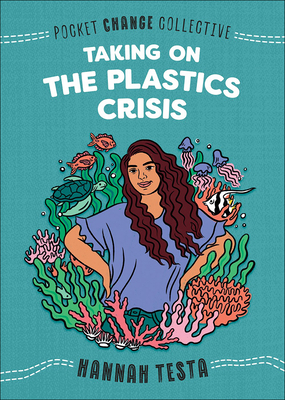 Taking on the Plastic Crisis (Prebound)


Special Order—Subject to Availability
(This book cannot be returned.)
Pocket Change Collective was born out of a need for space. Space to think. Space to connect. Space to be yourself. And this is your invitation to join us. Taking on the Plastics Crisis delivers straightforward advise for getting involved in the global movement to eliminate single-use plastics. -- Booklist, Starred Review Brief yet inspirational, this story will galvanize youth to use their voices for change.--Kirkus Reviews Taking on the Plastics Crisis is a sobering and inspiring read by a brilliant young change maker. Now is the time for all of us to come together to solve the plastic pollution crisis.--Ed Begley Jr. (actor and environmental activist) In this personal, moving essay, youth activist Hannah Testa shares with readers how she led a grassroots political campaign to successfully pass state legislation limiting single-use plastics and how she influenced global businesses to adopt more sustainable practices. Through her personal journey, readers can learn how they, too, can follow in Hannah's footsteps and lower their carbon footprint by simply refusing single-use plastics. Pocket Change Collective is a series of small books with big ideas from today's leading activists and artists. In this installment, youth activist Hannah Testa, the founder of Hannah4Change, chronicles both her personal and political mission to save the Earth's oceans by limiting single-use plastic products.
Hannah Testa is a sustainability advocate, international speaker, and founder of Hannah4Change, an organization dedicated to fighting issues that harm the planet. She has partnered with politicians to successfully approve legislation to protect the Earth's oceans by limiting single-use plastics like straws, bags, and utensils. Most notably, she has worked as part of a global coalition of NGOs to influence Starbucks to develop a more sustainable coffee cup, and she partnered with Kashi to co-create healthy, organic, non-GMO cereals and snacks for kids.She has been featured in Parade magazine, Teen Vogue, Goop, USA Today, and has appeared on CNN and Good Morning America. Ashley Lukashevsky is an illustrator and visual artist born and raised in Honolulu, Hawaii, currently based in Los Angeles. Ashley uses illustration and art as tools to strengthen social movements against systemic racism, sexism, and anti-immigrant policy. She aims to tear down these systems of oppression through first envisioning and drawing a world without them. Her clients include Refinery29, Broadly, The Washington Post, Planned Parenthood, Girls Who Code, GOOD magazine, Brooklyn magazine, ACLU, Red Bull, Snapchat, Air Jordan, and Logo TV. Ashley is also the illustrator of the best-selling Antiracist Baby, by Ibram X. Kendi.