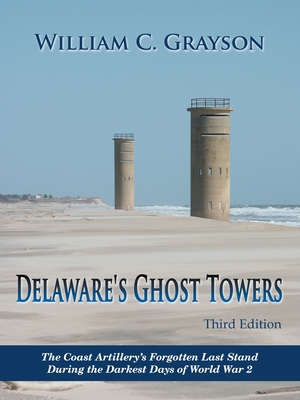 
Not On Our Shelves—Ships in 1-5 Days
Using the First State as a representative example for all three American shorelines, Delaware's Ghost Towers reveals how the mysterious World War 2 concrete sentinels standing along Delaware's ocean beaches were used to guard against penetration by powerful German battleships bent on shelling Philadelphia and the oil refineries of Wilmington. The book tells the story of the nearly forgotten Coast Artillery soldiers, who were the front-line, standing a combat-ready watch during the anxious early months of the war, when the first invasion of the Homeland since the War of 1812 was considered a frightening real possibility. From a slow start during neglectful pre-war days, the Coast Artillery grew to operate the US' most heavily armed installations, pointing the Army's biggest guns of the war out to sea. Their mission is described against a background of surrounding World War 2 events, German naval and commando operations in US waters and on US beaches - an important Last Stand worth remembering.