We Are Wolves (Hardcover) 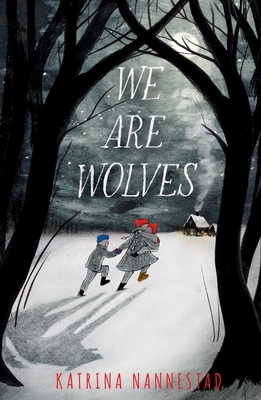 We Are Wolves (Hardcover)


Not On Our Shelves—Ships in 1-5 Days
This “hauntingly atmospheric” (Kirkus Reviews, starred review), heart-stopping middle grade novel follows three of the Wolfskinder, German children left to fend for themselves in the final days of World War II, as they struggle to hold onto themselves and each other while surviving in the wild.

Sometimes it’s good to be wild. Sometimes, you have to be.

When the Russian Army marches into East Prussia at the end of World War II, the Wolf family must flee. Being caught by the Russians or the Americans would be the end for them. Liesl, Otto, and baby Mia’s father has already been captured, and they get separated from their mother in a blizzard after only a few days on the run.

Liesl had promised Mama that she’d keep her brother and sister safe, no matter what. They’ll forage in the forests if they have to. Little do they know that there are hundreds of other parentless children doing the very same thing. And they far too quickly learn that, sometimes, to survive, you have to do bad things.

Dangerous things. Wild things. Sometimes you must become a wolf.
Katrina Nannestad is an Australian author who grew up in a neighborhood stuffed full of happy children. Her adult years have been spent raising boys, teaching, daydreaming, perfecting her recipe for choc-chip bickies, and pursuing her love of stories. Katrina’s writing celebrates family, friendship, and belonging. She loves creating stories that bring joy to other people’s lives. Katrina now lives in central Victoria, on the side of a hill (in a house, not just in the long grass!) with her husband, an exuberant black whippet called Olive, and a cuddly magpie called Otto. To see more about her day-to-day life, visit her at KatrinaNannestad.com or follow her @Katrina.Nannestad on Facebook or @Katrina_Nannestad on Instagram.
A trio of German siblings must fend for themselves in order to survive during the final months of World War II.

As the war rages on, Liesl, Otto, and Mia live in East Prussia with their family… The Russian army breaks through German lines, spurring the family to abandon their village and seek safety in the midst of a terrible blizzard. The children become separated from their mother, and 11-year-old Liesl must honor the promise she made to Mama to take care of 7-year-old Otto and toddler Mia. The children are quickly found by some Red Army soldiers and taken to their temporary quarters, where a kindly German-speaking Russian means to protect them, but when the arrangement becomes too dangerous, they are forced once more to flee. The siblings attempt to survive on their own in the forest along with other orphaned German children known as the Wolfskinder, or wolf children. The children’s physical and emotional journeys, inspired by real events, are poignantly depicted as they struggle against the elements, hunger, and foes and try to understand the nonsensical nature of war and the unimaginable things it forces people to do to survive. Heiduczek’s hauntingly atmospheric art adds to the story’s emotional impact.

Liesl, her brother Otto, and sister Mia are “Wolfskinder,” German children orphaned or separated from their families in East Prussia at the end of World War II. Just 11 years old, Liesl’s fierce devotion to her younger siblings helps keep them—and their dream of being reunited with family—alive in a harsh and dangerous landscape.The plot’s relaxed pace is bolstered by vivid settings and nuanced, memorable characters. Liesl realistically transitions from child to adult, observing that, “We are all the same deep down. German. Russian. Children. Soldiers.” While the novel ends on a hopeful note, Nannestad leaves readers with an important, timely question: For those fleeing a country affected by war, does survival require surrendering cultural identity and heritage? VERDICT A compelling mix of historical fiction, survival, and adventure, this title shines light on a little-known episode from history. ­Recommended for all middle grade collections.–Marybeth Kozikowski
— School Library Journal, *STARRED REVIEW*

This story is a great example of historical fiction which covers an element of World War II that isn’t often told—the horrible life of the Wolfkinders. This tale follows three children—Lisle, Otto, and baby Mia—who must leave their mother on a frozen river as it is being bombed by the Russian army. Lisle is in charge of keeping the three together and safe. It is a huge task. They face bad weather, Russian soldiers, mean people (both adults and children), little or no food for several months, and varying degrees of filth, cold, and disease. Throughout their whole ordeal, Lisle and Otto show amazing strength and concern for each other, Mia, and the friends they meet along their journey. Though they do have moments of despair, both know they must rally in order to survive. This book is filled by turns with love, hope, and heart wrenching sadness. The children, particularly Lisle, are resilient and strong—great characters for middle school-age children to read about and learn from. Any child who likes historical fiction, especially stories about World War II, will enjoy this book. I loved it! Melinda W. Miller, PreK-12 Library Media Specialist, Colton-Pierrepont Central School, Colton, New York