The Moon from Dehradun: A Story of Partition (Hardcover) 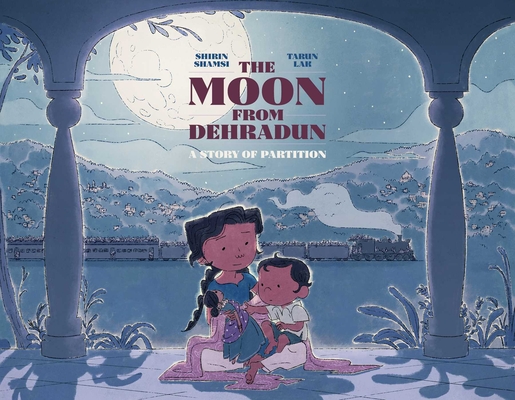 The Moon from Dehradun: A Story of Partition (Hardcover)


On Our Shelves Now at:
In time for the 75th anniversary of the Partition of British India, this picture book is a stirring account of the harrowing journey faced by millions of migrants in the aftermath of the division of India and Pakistan.

Azra knows that wherever she goes, her doll Gurya will follow. Even if it’s on a train that will take her far away from the house her family has lived in for generations. Even if there is a new flag flying in Dehradun, and no place left in it for Azra. At least she will be taking a piece of home with her.

But when Abba comes home and says they must leave right now, Gurya gets left behind in the scramble. Will Azra be strong enough to face the long journey alone? And what will happen to Gurya, now hundreds of miles behind them?

Inspired by the author’s family story, this lyrical, moving picture book is a testament to the strength, courage, and perseverance of the over 10 million refugees displaced by the largest forced migration in recorded history, and shares a young girl’s journey from her old home to a new one.
Shirin Shamsi’s family left India during the Partition. Having lived on three continents, she views herself as a global citizen and now spends her time sharing stories with children of the world. Shirin and her husband have raised six children—three human and three feline—and reside in the suburbs of Chicago.

Tarun Lak is an Indian American animator and illustrator. Born in Miami, Florida, and raised in Chennai, India, he attended Ringling College of Art and Design to study computer animation. He has since worked as a character animator on commercials and feature films including Spider Man: Into the Spider-Verse, Soul, and Luca. Tarun currently resides in the San Francisco Bay Area and enjoys drinking coffee and making art in his spare time. The Moon from Dehradun is his first picture book.
This picture book features the universal kid struggles of losing a doll, moving, and annoying little brothers set against the backdrop of the 1947 partition of India, into two independent nations---India and Pakistan...[b]ased on Shamsi’s own family story, this work features a heartrending narrative about the loss of a doll but also the loss of home. It also shows how something new can emerge out of heartbreak. With a limited palette of tans and blues, Lak’s arresting digital illustrations capture the pandemonium of the traumatic large-scale event with the same detail and care as the turmoil caused by a missing toy.
— School LIbrary Journal, starred review

Poignant and perfect. I’d never read a picture book story on Partition before and was blown away...it's tinged with a haunting sadness, yet saturated with hope and love. The illustrations complement the text perfectly and the last page brings the story together in a lovely and surprising way...I can't wait to see this book touch lives.

"Shamsi’s text vividly portrays the confusion and pain experienced by Azra’s family as well as the generosity of the strangers they encounter on their journey to their new home in Lahore. Relying on a muted palette and loose yet expressive linework, Lak skillfully conveys the uncertainty and fear felt by those who endured Partition. The book’s sweet conclusion also illuminates the power of new beginnings in desperate circumstances.

There's little comfort in the fact that forced migration is part of the human story, but there is always comfort in the potential for connection through the sharing of stories. The Moon From Dehradun, set during the partition of India and Pakistan in 1947, is relevant today, as war and climate change force people from their homes...[a] tender, semifictional account about starting over.
— Booklist

"This child’s perspective on the largest forced migration in modern human history is rendered with both tenderness and urgency."
— Horn Book Magazine

Shamsi’s text balances the deep sadness and disorientation that Azra feels with text that shows the strength and hope she draws from her role as older sibling. Lak’s bustling, thin-lined illustrations depict crowded trains full of similarly worried travelers—a glowing moon above them all—and, as Azra’s family heads toward a residence that others had to flee just as quickly, portray another family making their way toward Azra’s old home. It’s a haunting, history-based arc that powerfully depicts similarities among those made to flee.
— Publishers Weekly