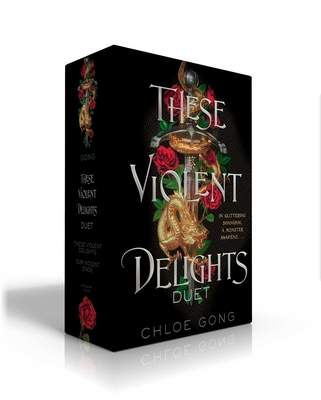 
Not On Our Shelves—Ships in 1-5 Days
A hardcover boxed set of Chloe Gong’s New York Times bestselling These Violent Delights and its sequel, Our Violent Ends—the lush fantasy duology reimagining Romeo and Juliet in 1920s Shanghai.

The year is 1926, and Shanghai hums to the tune of debauchery.

A blood feud between two gangs runs the streets red, leaving the city helpless in the grip of chaos. At the heart of it all is eighteen-year-old Juliette Cai, a former flapper who has returned to assume her role as the proud heir of the Scarlet Gang—a network of criminals far above the law. Their only rivals in power are the White Flowers, who have fought the Scarlets for generations. And behind every move is their heir, Roma Montagov, Juliette’s first love…and first betrayal.

But something is brewing in the shadows, and as the deaths stack up, Juliette and Roma must set their guns—and grudges—aside and work together, for if they can’t stop this mayhem, then there will be no city left for either to rule.

This heart-stopping hardcover boxed set includes:
These Violent Delights
Our Violent Ends
Chloe Gong is the New York Times bestselling author of These Violent Delights and its sequel, Our Violent Ends, as well as Foul Lady Fortune. She is a recent graduate of the University of Pennsylvania, where she double majored in English and international relations. Born in Shanghai and raised in Auckland, New Zealand, Chloe is now located in New York pretending to be a real adult. You can find her on Twitter, Instagram, and TikTok under @TheChloeGong or check out her website at TheChloeGong.com.