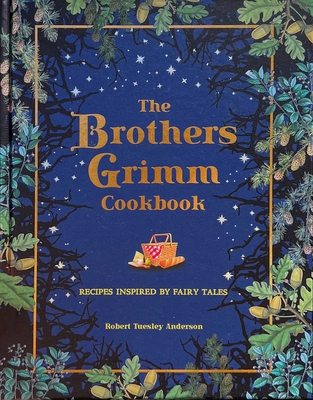 
Not On Our Shelves—Ships in 1-5 Days
This delicious collection of more than 50 recipes is inspired by the Brothers Grimm’s fairy tales.

The fairy tales of the Brothers Grimm are full of memorable characters, dark settings, life lessons—and delicious food. The Brothers Grimm Cookbook is a collection of more than 50 recipes inspired by the short stories of Jacob and Wilhelm Grimm, which were originally published in the early 19th century and continue to fascinate readers today. From starting your day with a plate of Clever Hans’s Sticky Bacon and Onion Pan Fry to celebrating the holidays with Hansel and Gretel’s Gingerbread House, there’s a recipe for every meal and occasion in this fascinating cookbook. Scholarly essays that examine the role of specific foods in the fairy tales accompany the recipes, allowing readers to immerse themselves even more deeply in the compelling world of the Brothers Grimm.
Robert Tuesley Anderson is a writer, poet, and editor living in the Southern Uplands of Scotland. His cookbooks have given him the opportunity to bring together two lifelong enthusiasms: good, home-cooked food and classical literature.