Down Under Fantasy Realms: An Anthology By New Zealand and Australian Authors (Paperback) 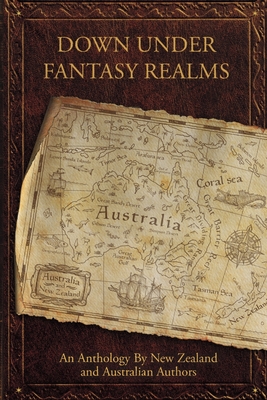 Down Under Fantasy Realms: An Anthology By New Zealand and Australian Authors (Paperback)


Not On Our Shelves—Ships in 1-5 Days
Gathered here together are twenty fantastic stories by seven fabulous Antipodean authors – authors you may not be familiar with … yet; authors you will want to read again and again.

High fantasy and low, magical realism, retold fairy stories, and even a hint of science-fiction – it's all here.

Some stories in this collection are excerpts, others are background or spin-off stories about characters in pre-existing novels, yet others are tasters of works-in-progress; the remainder are stand-alone tales.

Within these pages, children are born who have a special destiny, and old men relinquish their powers as their journeys come to a close; truths are found and lies are exposed; fears are faced and dreams become reality.

There are links to the authors' websites and social media pages, too, so that when you discover your next favourite writer, you'll know where to find them.
Wendy Scott has a New Zealand Certificate in Science (Chemistry), which allows her to dabble with fuming potions and strange substances, satisfying her inner witch.
Wendy writes short stories, fantasy, and children's novels. Her books have won multiple international book awards.
One of the creeds she lives by is to always – Live a life less ordinary!
Please visit https://authorwendyscott.mysites.io to learn more, read Wendy's blog, sign up for her newsletter, or to leave her a message. She loves hearing from readers.
Pen Names
Fantasy ~ Wendy Scott
Children's ~ WJ Scott
Other (Romance/Paranormal) ~ Wendy Jayne Belinda Mellor is an adopted Kiwi, who came to New Zealand on holiday from Ireland fourteen years ago – and forgot to go home. Over the years, she has written and taught fiction and non-fiction, dabbled in radio, scripted several plays, edited a couple of magazines, plus books, papers and other publications, spent time working in arts journalism and theatre-in-education, and won a number of literary awards. She has written a children's picture book called 'A Handful of Eggs', and two eco-fantasy/mythopoetic novels: 'Silvana – The Greening' and 'Silvana – The Turning', and, at the time of publication, is working on a third: 'Silvana – Restoration'. She also has an Irish folk-lore inspired YA novel in a state of near-finishedness. With a degree in theology and religious studies and a post-graduate diploma in Applied Spirituality she is fascinated by the big questions of life and what it really means to be human, and is particularly interested in myths, legends and folklore, so all her stories touch on those because she believes that's where truth is to be found. Sue Perkins has enjoyed reading since she joined the library at age seven and by eleven she had begun to write her own short stories. In her teenage years she found fantasy books and was hooked! Although she writes romance and historical romance, her main genre is speculative fiction and fantasy and she has over thirty books published in various genres, mainly speculative fiction. Ashley is a poet, novelist, and teacher living in Australia.
He teaches English, Media, and Music Production has played in a metal band, worked in an art gallery, and slaved away at music retail. Aside from reading and writing, Ashley loves volleyball and Studio Ghibli – and Magnum PI, easily one of the greatest television shows ever made. Brett Adams lives in Perth, Australia, with his wife and three children. He has a Ph.D. in
Computer Science, and develops mobile applications. He writes short stories and novels that
invite scratching below the surface. His first novel, Dark Matter, is a biology-
based-paranormal-fantasy-with-a-twist-of-science-fiction-adventure-and-just-a-hint-
of-thriller. His second, Strawman Made Steel, introduces hard-boiled detective Janus
McIlwraith. His latest, Blood and Ink, is a straight-up thriller and will be published by
Fremantle Press in 2022. Kate Shaw lives in Nelson with her two daughters and a giant dog. She balances her visits to Danton Bay with demands to play Lego, experimental baking, and exercising the giant dog. Although primarily a prose writer, she has recently been persuaded to try her hand at playwriting and she co-wrote her first play for the 2020 Nelson Fringe Festival. Her urban-fantasy trilogy, Danton Bay, follows three unassuming friends who are drawn into a shadowy world of magic-users that they had no idea existed. Fractured Magic, the final novel in the trilogy, is due to be published in 2021. Kirsty Anderson is a writer and photographer living in rural Queensland with her husband, four kids, two dogs, two cats, and assorted uninvited - but not unwanted - frogs and lizards. Kirsty has a history degree from the University of Melbourne and a diploma in Information Management. (This means she's a librarian, which was very useful in wiping her library fines in her pre-kid life.) She is very slowly completing a Masters of Ancient History.