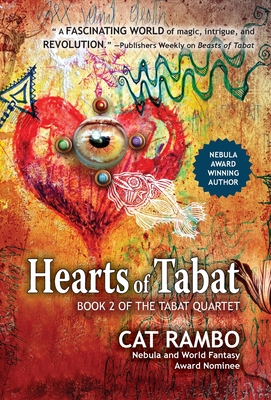 n the second book of The Tabat Quartet, Nebula award-winning author Cat Rambo expands the breathtaking story from Beasts of Tabat with new points of view as Adelina, Sebastiano, and others add their voices. Tabat is a world, a society, and a cast of characters unlike any you have read before.

Rousing speeches. All markers of the vast societal upheavals taking place in the city of Tabat.

But personal upheavals reflect the chaos. Adelina Nettlepurse, noted historian and secret owner of Spinner Press, watches the politics and intrigue with interest, only to find herself drawn into its heart by a dangerous text and a wholly unsuitable love affair with a man well below her station.

The match offered by Merchant Mage Sebastiano Silvercloth would be much more acceptable, but Sebastiano is hampered by his own troubles at the College of Mages, where the dwindling of magical resources threatens Tabat itself. And worse, his father demands he marry as soon as possible.

When Adelina's best friend, glamorous and charming gladiator Bella Kanto, is convicted of sorcery and exiled, the city of Tabat undergoes increasing turmoil as even the weather changes to reflect the confusion and loss of one of its most beloved heroes.

Meanwhile the Beasts of Tabat-magical creatures such as dryads, minotaurs, and centaurs-are experiencing a revolution of their own, questioning a social order that holds them at its lowest level. But who is helping the Beasts in their subversive uprising? ﻿