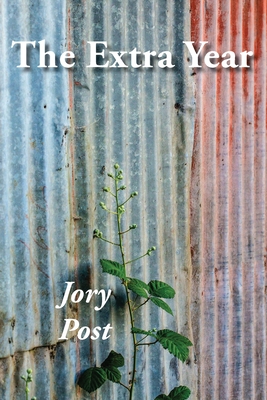 The emphasis of The Extra Year focuses on the responsibilities of the poet: to observe, track, and share details of the human condition with others, especially in times of illness. In October 2018, Post was diagnosed with pancreatic cancer, with a bleak prognosis given the tumor wrapped around a major artery. This hasn't hindered him from living a full and active life and keeping positive for himself and those around him. In late February, he began taking a poetry workshop from Santa Cruz County poet laureate, Danusha Lam ris. In five months, he has written over 200 poems, and has poems published in or to be published in three national literary magazines. The Extra Year tracks the progression of his physical and mental states after six months of chemotherapy and a soon-to-be Cybernife radiation procedure, with poems that delve into death and dying, humor, anger, and the joy of being alive.

Jory Post has been an educator and writer for 40 years as well as making handmade books and journals with his wife. His fiction and poetry have been published in Catamaran Literary Review, Chicago Quarterly Review, Porter Gulch Review, Red Wheelbarrow, 82 Review, and upcoming in The Sun. He is the cofounder and editor of phren-z online literary magazine in Santa Cruz.
These poems, written in a burst of productivity following a diagnosis, are smart, merciless missives sent from the edge of time. Poems that reveal a mind that wants to know all; about the nest of a hooded oriole, the behavior of humans on the oncology ward, the powers of the Linear Accelerator. Here is a heart brave enough to grieve all it has ever loved. And a speaker who takes the time to sift through the dirt, find riches, and lay them out for us, one gem at a time.

Bracingly honest and beautifully wrought, Jory Post’s The Extra Year explores mortality as well as the business of living. His wife’s snoring sounds like “…percussive inhaling, cello and bass on the exhale, an occasional hint of tuba…” A playful humor runs through many of the poems, both belying and intensifying the subjects. With an extraordinary scope, Post shares with us his fear of “the hot eye of death,” his love of the art of Joseph Cornell, and above all, his family and friends. He shares the story of a life well lived, told movingly and poignantly.
- Ellen Bass

In his marvelous book of prose poems, Jory Post asks, “What would I do if I was given an extra year?” This is not idle speculation. We learn early on that Post is writing in the shadow of a terminal cancer diagnosis, though he is determined “not to fuss about it too much.” In that spirit, he has written a book not about dying, but about living. The Extra Year also celebrates the writing life, and it’s clear that Post lives to write, and writes to live. His collection reminds us that life is both a gift, and a challenge to embrace it as deeply as we can. - Gary Young

Rainier Maria Rilke said that for a poet there are two kinds of poems: the ones a poet writes and the ones a poet has to write. In The Extra Year, Jory Post has given us those necessary, significant poems. Mortality and the imminence of dying is the window that frames the vision of this astonishing book. With candor, wit, and a deep humanity, he details a reverence for life out of the ordinary and commonplace of our days. He beholds the world with wonder, graciousness, and gratitude. This is a book you can return to again and again. I know of no other work quite like it.