Notes on the Cinematograph (Paperback) 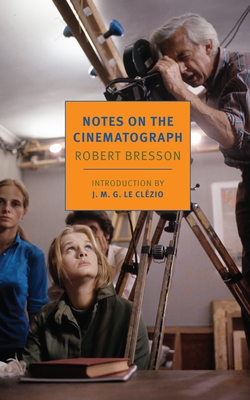 Notes on the Cinematograph (Paperback)


On Our Shelves Now at:
The French film director Robert Bresson was one of the great artists of the twentieth century and among the most radical, original, and radiant stylists of any time. He worked with nonprofessional actors—models, as he called them—and deployed a starkly limited but hypnotic array of sounds and images to produce such classic works as A Man Escaped, Pickpocket, Diary of a Country Priest, and Lancelot of the Lake. From the beginning to the end of his career, Bresson dedicated himself to making movies in which nothing is superfluous and everything is always at stake.

Notes on the Cinematograph distills the essence of Bresson’s theory and practice as a filmmaker and artist. He discusses the fundamental differences between theater and film; parses the deep grammar of silence, music, and noise; and affirms the mysterious power of the image to unlock the human soul. This book, indispensable for admirers of this great director and for ­students of the cinema, will also prove an inspiration, much like Rilke’s Letters to a Young Poet, for anyone who responds to the claims of the imagination at its most searching and rigorous.
Robert Bresson (1901–1999) was born in Bromont-Lamothe, France. He attended the Lycée Lakanal in Sceaux, and moved to Paris after graduation, hoping to become a painter. He directed a short comedy, Affaires publiques, in 1934, but his work was curtailed by the outbreak of World War II. He enlisted in the French army in 1939 and was captured in 1940, spending a year in a labor camp as a prisoner of war. After his release he returned to Paris and directed Angels of Sin (1943), his first full-length film, under the German occupation. Les dames du Bois de Boulogne followed in 1945, and in 1951 Diary of a Country Priest was met with widespread acclaim. His next film, A Man Escaped (1956), which follows the memoirs of André Devigny, a French Resistance leader incarcerated during World War II, became a hit. He made eleven more films over the next three decades, including Mouchette (adapted from the Georges Bernanos novel of the same name, published as an NYRB Classic); Au Hasard Balthazar; Pickpocket; Lancelot of the Lake; and L’Argent. Throughout his career Bresson eschewed the use of theatrical techniques and employed nonprofessional actors whom he referred to as models. Raised in the Catholic faith, he worked on and off throughout his career on an adaptation of the book of Genesis, which never saw fruition. He died in Droue-sur-Drouette at the age of ninety-eight.

Jonathan Griffin (1906–1990) served as the director of BBC European Intelligence during World War II. Among the authors he has translated are Jean Giono, Fernando Pessoa, and  Nikos Kazantzakis. A collection of Griffin’s poetry, In Earthlight, was published in 1995.

J.M.G. Le Clézio was born in Nice in 1940. He has written more than forty books, including works of fiction and memoir as well as collections of essays and books for children. In 2008 he was awarded the Nobel Prize in Literature.
"The collection Bresson on Bresson: Interviews 1943-1983 and Bresson's own Notes on the Cinematograph are primers for the gradual understanding of Robert Bresson, to paraphrase Gertrude Stein...Notes on the Cinematograph is the ultimate refinement of Bresson's thought, a loosely grouped succession of aphorisms and Zen koans." —J. Hoberman, The New York Times

“If there were any director you might expect to write what is, in effect, a philosophical notebook on the art and science of film-making, it would be Bresson...This is…a collection that reaches beyond its subject matter. It actually is philosophy.” —Nicholas Lezard, The Guardian

“Half-philosophy, half-poetry, Notes on the Cinema­to­graph reads in places like The Art of War for filmmakers.” —John Semley, The A.V. Club

“The power of Bresson’s films lies in the fact that his purity and fastidiousness are at the same time an idea about life, about what Cocteau called ‘inner style,’ about the most serious way of being human.” —Susan Sontag

"Short, aphoristic fragments that guide Bresson's film making. Scribbed down as 'notes to self,' reading them in whole is astonishing & inspiring, a totality of a brilliant filmmaker." --Mike Kitchell, HTMLGiant

Notes on the Cinematograph...feels like the rare beast: a manifesto of filmmaking one doesn’t see much of nowadays. In it, Bresson’s artistic philosophy is laid bare.
—Zak Salih, The Los Angeles Review of Books

An original and singular figure, Breton sought a truer form of narrative film...a welcome creative tool, both for people interested in making art and for those who just enjoy talking or thinking about it.
—Ignatiy Vishnevetsky, A.V. Club

Bresson’s films are many things. They are among the most maddeningly beautiful in all of cinema; each is like a wedge violently driven into the world. Bresson’s cinema is a monument to an idea of art that knows no compromise.
—Michael Blum, The Brooklyn Rail