In a Bucolic Land (Paperback) 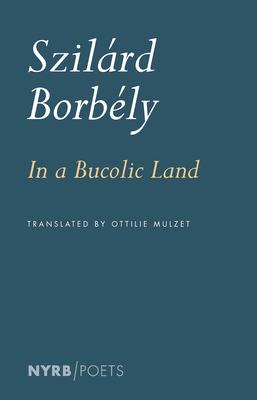 In a Bucolic Land (Paperback)


In Stock—Click for Locations
A moving, posthumous collection of elegies and eclogues that meditate on nature, landscape, and history, by a great Hungarian poet.

Szilárd Borbély spent his childhood in a tiny impoverished village in  northeastern Hungary, where the archaic peasant world of Eastern Europe  coexisted with the collectivist ideology of a new Communist state. Close to the Soviet border and far from any metropolitan center, the village was a world apart: life was harsh, monotonous, and often brutal, and the Borbélys, outsiders and “class enemies,” were shunned. In a Bucolic Land, Borbély’s final, posthumously published book of poems, combines autobiography, ethnography, classical mythology, and pastoral idyll in a remarkable central poetic sequence about the starkly precarious and yet strangely numinous liminal zone of his youth. This is framed by elegies for a teacher in which  the poet meditates on the nature of language and speech and on the adequacy of words to speak of and for the dead. Ottilie Mulzet’s English translation conveys the full power of a writer of whom László Krasznahorkai has said, “He was a poet—a great poet—who shatters us.”
Szilárd Borbély (1963–2014) was born in Fehérgyarmat in northeastern Hungary and studied Hungarian philology and literature at the University of Debrecen, where he later taught. An authority on Hungarian literature of the late-Baroque period as well as a writer, Borbély was awarded several literary prizes, including the prestigious Palladium Prize in 2005. Widely considered to be one of the most important European poets of the post-Communist period, Borbély’s poetic concerns were broad but generally encompassed the marginalized in Hungarian society.

Ottilie Mulzet is a translator of poetry and prose, as well as a literary critic. She was awarded the Tibor Déry Prize in 2020 and the National Book Award for Translated Literature in 2019 for her translation of László Krasznahorkai’s Baron Wenckheim’s Homecoming. In addition to In a Bucolic Land, she has translated Borbély’s novel The Dispossessed and his verse collections Berlin-Hamlet (NYRB Poets) and Final Matters: Selected Poems, 2004–2010. She is based in Prague.
"I am staggered by In a Bucolic Land. In long, wending lines, the poems present many of the same scenes and characters as Borbély’s novel, but differently paced and framed: the world of his childhood—a savagely poor rural village, still scarred by World War II, by Nazi and Soviet violence, by its own ingrown anti-Semitism." —Rosanna Warren, Ploughshares

"With these poems, Borbély holds our faces against the raw, fraying edges of humanity, in all its messiness, cruelty, and pain. These poems are, in many ways, 21st-century deconstructions of pastoral idyll. Borbély does not romanticize the village nor lament the supposed loss of traditional ways of life. . . . This work reveals a vast knowledge, not only of linguistic mediation from Hungarian to English, but of the history of Soviet collectivization, the specifics of a Hungarian agricultural tradition, and a deep understanding of the messy and complicated ways in which the distant and often abstract workings of geopolitics are felt by even the smallest, most seemingly insignificant communities." —Alina B. Williams, Hopscotch Translation

“Szilárd Borbély was one of the best and most original poets and novelists of his generation—and Ottilie Mulzet is a wonderful translator of his work.” —George Szirtes

“[Borbély] is considered one of the most important figures in contemporary Hungarian literature, having had an immense impact on the transformation of Hungarian poetry in the last decade, strongly influencing the conceptualization of poetry’s social role and linguistic-thematic possibilities. . . . Borbély’s poetry, prose, and essays try to bring the readers closer to the lives of those who cannot speak of their trauma or suffering. They can be uneducated and poor villagers, survivors of the Holocaust, women grieving after a miscarriage, or victims of terrible aggression. Through Borbély’s texts we readers become increasingly less cruel-hearted.” —László Bedecs, Asymptote