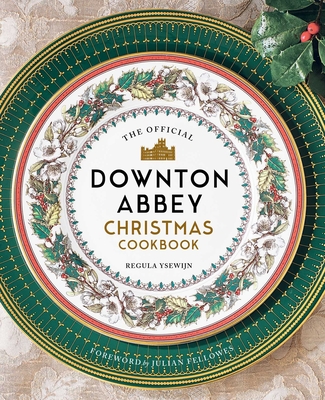 
Not On Our Shelves—Ships in 1-5 Days
This elegant coffee table cookbook highlights the luxe and elegance of the Christmas at Downton Abbey and features a collection of traditional British holiday recipes, from appetizers to desserts, that were popular during the Edwardian period.

Take a seat at the Christmas table of Downton Abbey, the historic British estate at the heart of the popular PBS series. Downton fans will appreciate this enticing collection of classic British holiday recipes from the Edwardian era, evocative narratives about Christmas traditions, and seasonal anecdotes from the award-winning series. Colorful photographs of finished dishes, fan-favorite moments from the Christmas episodes, and excerpts of character quotes bring the spirit of the holidays to life.
Regula Ysewijn is an internationally acclaimed food writer and author of books about food culture like the history of British puddings and the traditions of Belgian beer cafés. She consults for companies like the National Trust and most recently the TV series Downton Abbey and is also one of the two judges of the Belgian version of The Great British Bake Off in addition to being a judge for The Guild of Fine Food’s Great Taste Awards and World Cheese Awards for nearly 10 years. The Official Downton Abbey Christmas Cookbook is Regula's seventh book.
“Now you can eat like an aristocrat”
— Delish

"For fans of the Crawley family there should be one book at the top of your list for recipe-planning."
— Bustle

"If your mouth has ever watered at the sight of these luxurious meals while watching the show, the time has come to finally try them yourself"
— PopSugar

“Fans finally have something new to be excited about.”
— Guilty Eats

"If you miss the drama, the opulence, and the familiarity of your favorite upper-crust period drama, you can try your best to recreate it with The Official Downton Abbey Christmas Cookbook"
— Mental Floss

If you throw on your favorite red, cheery apron, flip open a good cookbook, and settle on a recipe that tickles your taste buds, bliss can be achieved... especially if that cookbook happens to be The Official Downton Abbey Christmas Cookbook.
— Southern Living

"You don’t have to be an English aristocrat to enjoy Yorkshire Pudding, Spinach Balls á L’Italien or the other indulgent dishes in “The Official Downton Abbey Christmas Cookbook”
— San Jose Mercury News