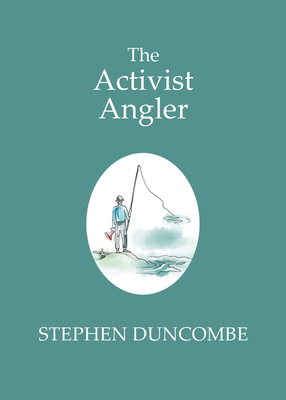 This elegantly written and charmingly illustrated book offers a series of reflections on the way lessons learned from angling can be applied to political activism and vice versa. Patience, preparation and precision are needed both to catch fish and build a movement.

An avid fisherman in his youth, Steve Duncombe put down his rod nearly forty years ago, picking up, instead, a bullhorn and a placard to begin organizing community groups, mobilizing marches, staging direct actions, walking picket lines, and being arrested for civil disobedience more times than he can remember. Over the past decade, he has traveled the globe training activists to think more like artists and artists to think more like activists.

Looking for a physical retreat and mental break during the pandemic of 2020 Duncombe took up fishing again. After so many decades away from sport, he had to re-teach himself how to fish and approached the practice with what Zen masters call Beginner's Mind. With no recent experience to fall back on, every fish successfully caught or line hopelessly snarled provided a clear lesson. With hours spent doing little more than casting and retrieving -- actually catching fish being a fraction of the time spent fishing -- he had plenty of time to think about the lessons he was learning. One of the things he thought a lot about was activism. Fishing, he discovered, has a lot to teach about the art of activism.

The Activist Angler brings together these lessons in an engaging journey from the street to the beach and back. The format is simple: one refection on fishing followed by another on what might be learned and applied to activism with each accompanied by an illustration. Topics range from telling fish stories and the trap of activist nostalgia, to the impossibility of thinking like a fish yet the necessity of understanding one's audience, with detours through meditations on self-care, catch-and-release, and taking responsibility for the human cost of one's political actions.

Stephen Duncombe is an associate professor at New York University's Gallatin School in the department of Media, Culture and Communications and is a lifelong political activist. He is the author and editor of six books including Dream: Re-Imagining Progressive Politics in an Age of Fantasy, Notes From Underground: Zines and the Politics of Underground Culture, The Bobbed Haired Bandit: Crime and Celebrity in 1920s New York, Cultural Resistance Reader, White Riot: Punk Rock and the Politics of Race, and (Open) Utopia.