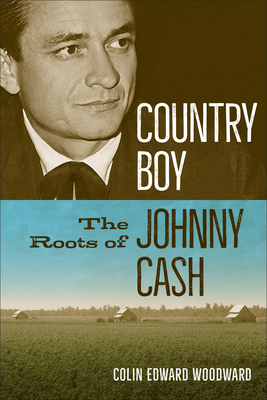 Because Johnny Cash cut his classic singles at Sun Records in Memphis and reigned for years as country royalty from his Nashville-area mansion, people tend to associate the Man in Black with Tennessee. But some of Cash’s best songs—including classics like “Pickin’ Time,” “Big River,” and “Five Feet High and Rising”—sprang from his youth in the sweltering cotton fields of northeastern Arkansas.

In Country Boy, Colin Woodward combines biography, history, and music criticism to illustrate how Cash’s experiences in Arkansas shaped his life and work. The grip of the Great Depression on Arkansas’s small farmers, the comforts and tragedies of family, and a bedrock of faith all lent his music the power and authenticity that so appealed to millions. Though Cash left Arkansas as an eighteen-year-old, he often returned to his home state, where he played some of his most memorable and personal concerts. Drawing upon the country legend’s songs and writings, as well as the accounts of family, fellow musicians, and chroniclers, Woodward reveals how the profound sincerity and empathy so central to Cash’s music depended on his maintaining a deep connection to his native Arkansas—a place that never left his soul.

Colin Woodward is an archivist who holds a PhD in history from Louisiana State University. He is the author of Marching Masters: Slavery, Race, and the Confederate Army during the Civil War and the host of the American Rambler history and pop-culture podcast.
“Johnny Cash comes alive in Arkansas, and it in him. Though his fabulous career took him far afield, as Colin Woodward tells us in this important book, all roads led back to the piney woods and gumbo soil of his fateful home state.”
—Michael Streissguth, Johnny Cash: The Biography

“Country Boy is a welcome addition to all things Cash, focusing directly on his home state of Arkansas and the influence it had on shaping his values and nurturing his creativity. Colin Woodward peels away myths and legends, including some perpetuated by Cash himself, and replaces them with facts and absorbing scenarios of how the fictions came about.”
—Ruth Hawkins, Emeritus director, Arkansas State University Heritage Sites, and founding director, Johnny Cash Boyhood Home

“It would be hard to overstate the role of Johnny Cash’s Arkansas upbringing, through Depression and wartime, in shaping the artist and citizen he later became. Country Boy puts Cash in proper historical and geographic context in this vital contribution to our understanding of the Man in Black.”
—Michael Stewart Foley, author of Citizen Cash: The Political Life and Times of Johnny Cash