A Summer Adventure: A Long Time Ago (Paperback) 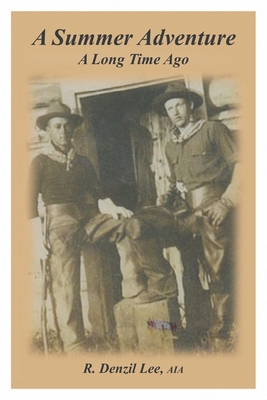 A Summer Adventure: A Long Time Ago (Paperback)

A Summer Adventure chronicles when the author's father and uncle spent their summer working on a Wyoming cattle ranch in 1917. The book's foreword explains how this book came about and the various recollections that together made the story complete.

It is a true story of two boys finding a seasonal job, and what they learned and experienced in that summer long ago.

Their adventure took place in the last few years of the Wild West. Buffalo Bill (William F. Cody) was still touring the world with his Wild West Show, complete with real Indians, cowboys, and chuck wagons.

Meet Denzil Lee & Vahn Clissold, cousins, who grew up in Utah. Both were 19 years old in 1917. "When my dad passed away, I found his version of his summer adventure, but filed it for future use. When my mom passed away, a number of years later, I ran across my uncle's version of the same summer adventure and he identified the ranch. I found, in an old photo album, photos of that ranch. I thought this would make an interesting book for young readers."

Californian R. Denzil Lee, AIA, is an architect, land planner, and preservationist by day. By night he produces club dates and concerts for his jazz musician friends. He lives with his wife, Beverly, in the small community of Nuevo, California, situated between Palm Springs and Riverside. It's a rural community where he has been involved in the land planning since the late sixties. The author has written two other books published by Strategic Book Publishing, Found in the Forest and Memories of Crystal Cove; both relate his personal experiences.