A Pitiful, Unholy Mess: The Histories of Wheeler, Bellows, and Haleiwa Fields and the Japanese Attacks of 7 December 1941 (Hardcover) 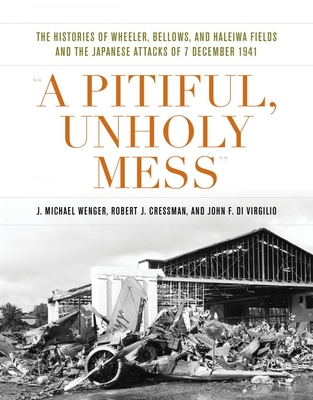 A Pitiful, Unholy Mess: The Histories of Wheeler, Bellows, and Haleiwa Fields and the Japanese Attacks of 7 December 1941 (Hardcover)


Not On Our Shelves—Ships in 1-5 Days
A Pitiful, Unholy Mess is a detailed combat narrative of the 7 December 1941 Japanese attacks on O'ahu's Wheeler, Bellows, and Haleiwa Fields. Since these bases comprised O'ahu's fighter defenses, the Japanese needed to neutralize these bases (particularly Wheeler Field) to prevent U.S. aircraft from interfering with attacks on the Pacific Fleet. Although the loss of life at the three fields was less than that sustained by the Pacific Fleet at Pearl Harbor, the attacks caused destruction and mayhem that proved disastrous and wrenching. The work focuses on descriptions of actions in the air and on the ground at the deepest practical tactical level, from both the U.S. and Japanese perspectives. Such synthesis is possible only by doggedly pursuing every conceivable source of American documents, reminiscences, interviews, and photographs. Similarly, the authors sought out Japanese accounts and photography from the attacks, many appearing in print for the first time. Much information from the reports of the Japanese air groups and the aircraft carrier Shōkaku has never been used. On the American side, the authors also have researched the U.S. Army Air Force Individual Flight Records at NARA, St. Louis, that provide operational details of the pilots' flights, as well of their military careers. The authors were among the first to research these microfilmed records within months after NARA, St. Louis accessioned them. The authors have delved into the background and personalities of key Japanese participants and have translated and incorporated Japanese aircrew rosters from the attacks. This accumulation of data and information makes possible an intricate and highly integrated story that is compelling and unparalleled. The interwoven nature of the narratives of both sides provides a deep understanding of the events at Wheeler, Bellows and Haleiwa Fields that has been impossible to present heretofore.
Military historian J. Michael Wenger has co-written eleven books, and numerous journal articles, newspaper features, and reviews. His main interest is Japanese carrier aviation and doctrine in World War II. He lives in Raleigh, North Carolina. Naval historian Robert J. Cressman lives in Silver Spring, Maryland. His The Official Chronology of the United States Navy in World War II received a John Lyman Book Award (1999) and his body of work on U.S. naval aviation history was recognized by the Admiral Arthur W. Radford Award (2008). He is currently editor of the online Dictionary of American Naval Fighting Ships. Military historian John F. Di Virgilio lives in Honolulu, Hawaii. He is the author of two groundbreaking articles related to Pearl Harbor and is recognized for his extensive research on Japanese naval ordnance, and for his illustrated Pearl Harbor battleship damage profiles.