Warships of the Soviet Fleets 1939-1945, Volume I: Major Combatants (Hardcover) 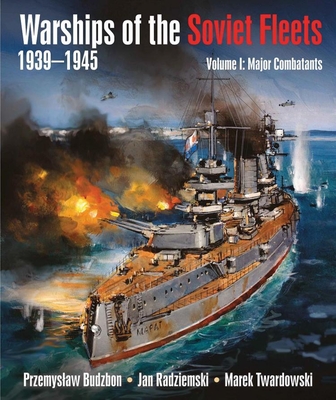 Warships of the Soviet Fleets 1939-1945, Volume I: Major Combatants (Hardcover)


Not On Our Shelves—Ships in 1-5 Days
Seventy-five years after the end of the World War II the details of Soviet ships, their activities and fates remain an enigma to the West. In wartime such information was classified and after a brief period of glasnost ('openness') the Russian state has again restricted access to historical archives. Therefore, the value - and originality - of this book is difficult to exaggerate. It sees the first publication of reliable data on both the seagoing fleets and riverine flotillas of the Soviet Navy, listing over 6,200 vessels from battleships to river gunboats, and mercantile conversions as well as purpose-built warships.  Divided into three volumes, this first covers major surface warships down to MTBs and armored gunboats, as well as submarines. For every class there is a design history analyzing strategic, tactical, and technical considerations, and individual ship detail includes construction yard, key building dates, commissioning, fleet designations, relocations, and fate. Once a closely guarded secret, the wartime loss of every ship and boat (over one thousand) is described. Furthermore, the confusion caused by frequent name changes is clarified by an index that runs to sixteen thousand items.  By following the ships through both their wartime and earlier history, the book reveals many aspects of Russian history that remain highly -sensitive: clandestine co-operation with Weimar Germany and fascist Italy, the NKVD-enforced closure of Soviet borders, the 'Gulag Fleet', the faked Metallist sinking that excused the military occupation of Estonia, and the ill-conceived pact with Nazi Germany. Restrictions recently imposed on historical publications in Russia mean this book could certainly not have been published there - as proven by the fact that most of the authors' Russian collaborators preferred not to disclose their identities.  This is undoubtedly one of the most important naval reference works of recent years and will be welcomed by anyone with an interest in warships, the Soviet Navy, or maritime aspects of World War II.
The authors grew up in Poland under Soviet domination and were forced to learn Russian, which guaranteed a profound understanding of Soviet-Russian thinking and the smallest nuances of its history. Their experience is varied but pertinent. Przemyslaw Budzbon worked closely with officers of the Soviet Navy for a dozen years, as a constructor of Soviet warships. Marek Twardowski, a curator at the Polish National Maritime Museum, has an outstanding background in professional maritime history. Jan Radziemski, thanks to a wide network of contacts among historians and maritime enthusiasts in Russia, was able to reach information and sources unavailable to official researchers.