Thanks to Frances Perkins: Fighter for Workers' Rights (Hardcover) 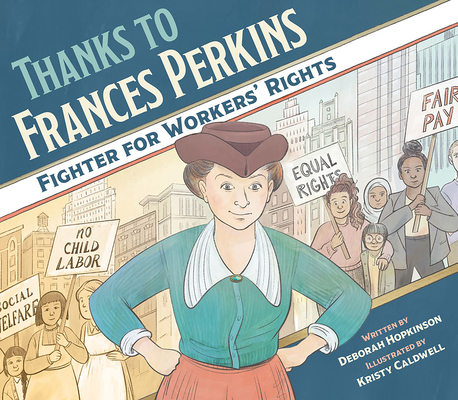 Thanks to Frances Perkins: Fighter for Workers' Rights (Hardcover)


Special Order—Subject to Availability
An engaging picture book biography of Frances Perkins, the activist and first female United States cabinet member who created the Social Security program. From award-winning author Deborah Hopkinson.
At 31, Frances Perkins witnessed the Triangle Waist Factory fire in 1911, one of the worst industrial disasters in United States history. The event forever changed her, and she dedicated herself to the fight for workers' rights.
When she became Secretary of Labor in Franklin Delano Roosevelt's administration, she had the opportunity to make real her bold vision of a country where no one is left out and everyone is protected. Thanks to her efforts, we have the Social Security program, a move that changed Americans' lives for generations to come.
Deborah Hopkinson's energetic text and Kristy Caldwell's appealing illustrations unite to tell Perkins' fascinating story as well as introduce early concepts of financial literacy, the Social Security Act, and the New Deal. Back matter features more information about Frances Perkins, Social Security, and resources for economic education.
Deborah Hopkinson grew up in Lowell, Massachusetts, and received a BA in English from the University of Massachusetts and an MA in Asian Studies from the University of Hawai'i at Manoa. She is the author of more than fifty books for young readers, including picture book and middle grade fiction and nonfiction. She lives in Oregon with her family and a menagerie of pets.

A Louisiana native, Kristy Caldwell received an MFA in Illustration from the School of Visual Arts and has illustrated several picture books and graphic novels. She lives in New York with her partner, theater director Kelly O'Donnell.
"The lively text presents Perkins'; life and times, while emphasizing her significant contributions to society. Created using pleasant, subdued colors, the well-composed digital illustrations bring past eras into focus and show Perkins' determined work on behalf of others. An informative picture-book biography of a notable American." —Booklist

"Engaging. . . An informative portrait of an activist and advocate whose accomplishments are still evident today." —Kirkus Reviews