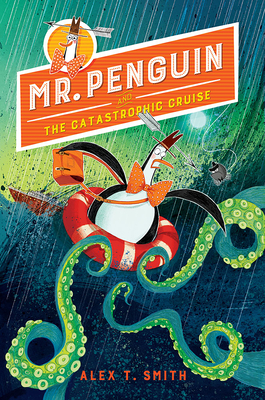 This is book number 3 in the Mr. Penguin series.

Dashing detective Mr. Penguin and his Adventuring gang are in for a wild ride when they board a luxury cruise ship. From Alex T. Smith's delightfully illustrated, mystery-detective series.
Mr. Penguin and his kung fu spider sidekick, Colin, are ready for some well-deserved rest and relaxation! Or they would be, if threatening notes hadn't appeared and the ship's crew wasn't whispering secrets. After befriending a young stowaway, Mr. Penguin discovers someone is planning on endangering the lives of the rich and famous on board to chase after the Fountain of Youth. Can Mr. Penguin foil this perilous plot and get home in time for a fish finger sandwich?
Alex T. Smith's Mr. Penguin is a page-turning, illustrated middle grade series that is sure to thrill young readers looking for a good adventure and major laughs. Two color illustrations throughout.
Alex T. Smith briefly considered careers in space travel, cookery and being a rabbit, but finally decided to become an illustrator. He earned a first-class honors degree in Illustration from Coventry University and went on to create the award-winning Claude series which has been developed as an animated TV show. When he isn't doodling in his sketchbook, Alex can be found people-watching and eavesdropping. He lives in England with two very tiny and naughty dogs.
"Gloriously silly. . . illustrations reminiscent of Quentin Blake lend the story a daffy verve, and the short chapters with cliffhanger endings make for a perfect read-aloud. . . . Ridiculously charming." —Kirkus Reviews

"Think Indiana Jones adventure with an Agatha Christie twist and you have the zany antics of Mr. Penguin and company. The story features a cast of endearing characters and a writing style that walks the line between funny and zany. With illustrations offering complementary, but just as wacky, details for younger readers, this title will still appeal to adult readers as well. . . . A great addition to a library or home bookshelf." —School Library Connection