The King of Little Things (Paperback) 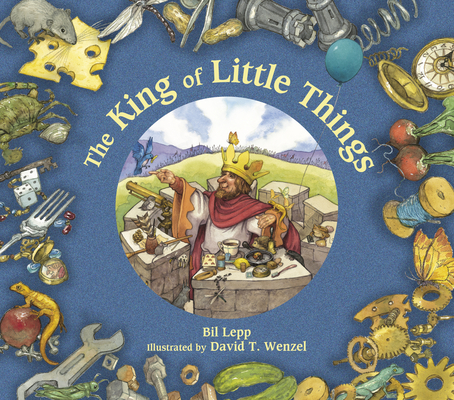 The King of Little Things (Paperback)


In Stock—Click for Locations
Only the King of Little Things stands between King Normous and his goal of conquering the world. And little things can wield great power.
In a world of vast kingdoms lives a king who is happy and content to reign over all things small. Not so King Normous. He wants to be Ruler of All the World. After having erased every empire and raided every realm, Normous is enraged to learn that the King of Little Things still rules over his tiny kingdom. He sends his army to defeat this upstart, but he finds he cannot outfight or outwit a king who holds sway over the small things of the world. After all, it is the small things that keep the big things going.
Bil Lepp's imaginative tale of the beauty and importance of all things small is perfectly paired with illustrator David T. Wenzel's bright watercolor paintings.
Bil Lepp is a nationally renowned storyteller who has been featured numerous times at the National Storytelling Festival, at the Smithsonian Folklife Festival, and at major events across the country. He is also the host of a History Channel series called Man vs History. He lives in West Virginia.

David T. Wenzel is an illustrator and artist, best known for illustrating the graphic novel edition of J. R. R. Tolkien's The Hobbit. He began his career working for Marvel and DC Comics. Over the course of his career, he has also illustrated numerous children's books. He lives in Connecticut.
★ "The tale moves briskly, with high drama and gentle humor, and allows readers to find the moral naturally. Wenzel's watercolor illustrations are in perfect harmony with the text, in both detail and tone. Endpapers depict an assortment of small things that can be found within the illustrations, encouraging further examination. Adults and children who read this delightful and imaginative book together will find lots to talk about."—Kirkus Reviews, Starred Review

"Wenzel's watercolor illustrations present a medieval world of turreted castles, banquet tables laden with food, and raiding soldiers. There are plenty of humorous details such as nails that spring from doors and buttons that pop from suspenders. The witty writing enlivens this fable about appreciating the small things in life."—School Library Journal

"Small, Lepp clearly feels, is beautiful. Yet the story doesn't pall. Lepp revels in exploring the many ways the King of Little Things' insignificant but loyal subjects serve him. . . Wenzel delivers Mad magazine-style spreads of medieval feasts, battles, capes, and crowns. Brainy wordplay abounds, and a scavenger hunt is included, too. Lepp affirms living simply without sounding smarmy, and Wenzel offers a king whose underpants fall off. What's not to like?"—Publishers Weekly