Squirrel Is Alive: A Teenager in the Belgian Resistance and French Underground (Paperback) 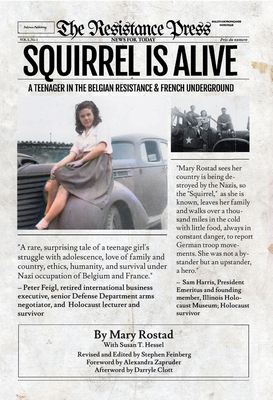 Squirrel Is Alive: A Teenager in the Belgian Resistance and French Underground (Paperback)


Coming Soon—Pre-Order Now
A sure to be classic in Holocaust literature from an underrepresented voice.

Squirrel is Alive: A Teenager in the Belgian Resistance and French Underground is the incredible story of Mary Rostad’s early life. Rostad was 16 years old when the Nazis conquered her home city of Brussels in 1940. She joined the resistance movement, serving in Belgium and later France, primarily as a courier of underground documents. At the end of World War II, Rostad met U.S. Army Staff Sergeant Allen Rostad.
Mireille Rostad was sixteen years old when the Nazis invaded her hometown of Brussels, Belgium. Using a false ID and a relying on a system of underground networks established by the resistance, she walked to France where she served as a medic and distributed clandestine newspapers. She served in the resistance for the remainder of the war using the code name “Squirrel.” After the war she worked in counterintelligence in General Dwight D. Eisenhower’s Frankfurt headquarters. She is the recipient of the Ellis Island Medal of Honor.