50 Things You Should Know About The Vikings (Paperback) 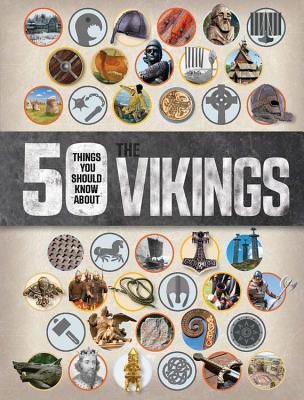 50 Things You Should Know About The Vikings (Paperback)


Not On Our Shelves—Ships in 1-5 Days
Known for their vicious raids, love of treasure, and fierce warriors: the vikings were the most feared invaders of the Medieval period. For 300 years, they terrorized the world in their hunt for land and power, but they also had a rich culture in art, literature, and law. Packed with facts, maps, infographics, and photos, this is the perfect introduction to the most feared invaders of the Middle Ages. Covering where they came from and who they conquered, their commerce and culture (including their bloodthirsty stories), their travel and trade, and the reasons behind their demise, this complete guide provides a comprehensive exploration of who these peoples were – and who they were not. For while there is no doubt that some Vikings launched bloodthirsty attacks in this period, pillaging communities and plundering treasure, many more were peaceful traders and settlers. Going beyond the fearsome warriors, battles, and adventures we associate with Vikings, this detailed book provides an insight into the everyday life of the people, to examine how and what they traded, what Viking village life was like, and how they made and sailed their famous long ships. It explores the rich culture of the Vikings, including the beautiful art they created, the legendary stories they told, and the complex law systems they built to maintain a civilized society as well as how their culture and influence lives on in the world today.

Philip Parker was born in Liverpool in 1965. He studied history at Trinity Hall, Cambridge and International Relations at the Johns Hopkins School of Advanced International Studies, Bologna, Italy before working in the British Diplomatic Service. He has a particular interest in ancient and medieval political and military systems. He is the author of The Northmen’s Fury: A History of the Viking World (2014), The Empire Stops Here: A Journey Around the Frontiers of the Roman World (2009) and the DK Eyewitness Companion Guide to World History (2010).

Dr Shane McLeod is an Associate Investigator (2013), an Honorary Staff Member in the School of Humanities at the University of Tasmania, and was an Impact Research Fellow in the Division of History and Politics at the University of Stirling, UK. He has a BA and PhD from The University of Western Australia and a Master of Viking and Early Medieval Studies from Uppsala University, Sweden. His research focuses upon migration, ethnicity and identity and performative aspects of ritual within historic landscape settings during the Viking Age, particularly in Britain.

“A chronicle of the spread of Vikings and Viking culture, from early raids to Wagner's Ring cycle and Tolkien. Maintaining more or less chronological progression within a framework of topical headers and rubrics, Parker opens the "Viking Age" with a first attack on England in C.E. 793, traces expeditions and invasions in lands from Iceland and Vinland to Russia through the death of Norwegian king Håkon the Old in 1263, then closes with the Vikings' contemporary romanticized (e.g., horned helmets) "reinvention."...loaded to the gunwales with glittering hoards of historical detail.” - Kirkus Reviews

“The latest volume in the 50 Things series traces the history of the Vikings from their first raid on England in 793 CE through the death of King Håkon the Old in 1263…Showing up well on the book’s glossy pages, the many colorful illustrations feature period paintings, prints, tapestries, and sculptures, as well as photos of sites, ruins, preserved ships, reconstructed buildings, treasures, and other artifacts. Adding a bit of drama, a few photos show battles staged by modern reenactors using appropriate Viking weapons, armor, and tactics. This book offers a visually inviting introduction to the Vikings.”
— Carolyn Phelan for Booklist Online


"With strikingly vibrant photographs and drawings, this book will teach readers an amazing amount about the Vikings. Fifty important artifacts, battles, and personalities are described, from Harald Bluetooth—the first Christian ruler of Denmark and the one who united the kingdom—to the Viking longhouses and their diet of grain crops, fruits, and bread. Sidebar material is included on each page. The information provided is not just conveyed through paragraphs of text but also via picture captions and at the bottom of pages, often with page numbers indicating where to go for more information. There is also a "Who's Who?” section with biographical information on 15 important Viking men. Many of the names are difficult to pronounce and may challenge some readers, but the book's information and presentation will prove very useful." - Ellen Spring, School Librarian, Oceanside High School, Rockland, Maine for School Library Connection