So You Think You're a New York Yankees Fan?: Stars, Stats, Records, and Memories for True Diehards (Paperback) 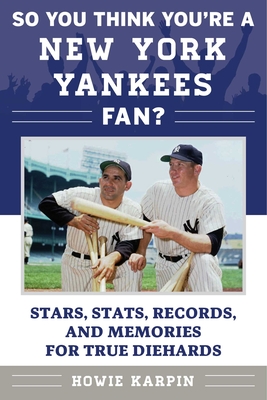 So You Think You're a New York Yankees Fan?: Stars, Stats, Records, and Memories for True Diehards (Paperback)


Special Order—Subject to Availability
Test and expand your knowledge of Yankee baseball with questions about Babe Ruth and Derek Jeter, the 1950s and the 1990s, nicknames, homeruns, and the Big Ballpark in the Bronx.

Rather than merely posing questions and providing answers, you’ll get details behind each—stories that bring to life players and coaches, games and seasons.

This book is divided into multiple parts, with progressively more difficult questions in each new section. Along the way, you’ll learn more about the great Yankee players and coaches of the past and present, from Babe Ruth to Joe DiMaggio, Mickey Mantle, Yogi Berra, Billy Martin, Catfish Hunter, Reggie Jackson, Goose Gossage, Ron Guidry, Don Mattingly, Dave Winfield, Derek Jeter, Mariano Rivera, Mark Teixeira and so many more. Some of the many questions that this book answers include:

This book makes the perfect gift for any fan of the Bombers!
Howie Karpin has been a sports journalist for nearly forty years. He is an accredited official scorer in New York for Major League Baseball, is an on-air update anchor for Sirius XM Sports, and has authored or coauthored eight books, including, with Mark Rosenman, Down on the Korner.