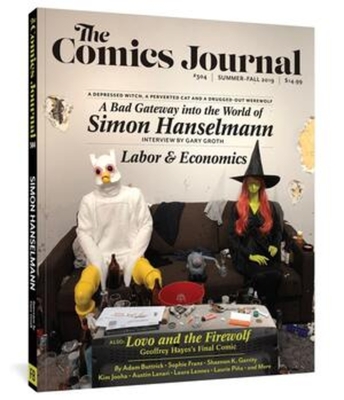 This issue of the award-winning magazine features an interview with Megahex cartoonist Simon Hanselmann and focuses on economics.

In this issue of the award-winning magazine, Tasmanian cartoonist Simon Hanselmann discusses how his webcomic — starring a witch, a cat, and an owl — became an internationally acclaimed, best-selling phenomenon. Thematically, #304 highlights labor and economics — the past and the future of organizing a comics union, work-for-hire contracts, and how comic conventions can better serve creators — with the Journal’s hallmark candor. Other features include an exclusive look at the unfinished graphic novel that Eisner and Geisel Award winner Geoffrey Hayes was working on before his untimely death in 2017, a peek inside the lush sketchbook of Sophie Franz, a timely work by Brazilian cartoonist Laura Lannes, and more!

Simon Hanselmann hails from Tasmania but resides with his family in Los Angeles, CA.  His bestselling New York Times series Megg, Mogg and Owl has been translated into thirteen languages, nominated for multiple Ignatz and Eisner awards, and won Best Series at the Angouleme International Comics Festival in 2018.

Gary Groth is the co-founder of The Comics Journal and Fantagraphics Books. He lives in Seattle.

Kristy Valenti is an Eisner-Award winning editor and a writer. She lives in Seattle, Wash.