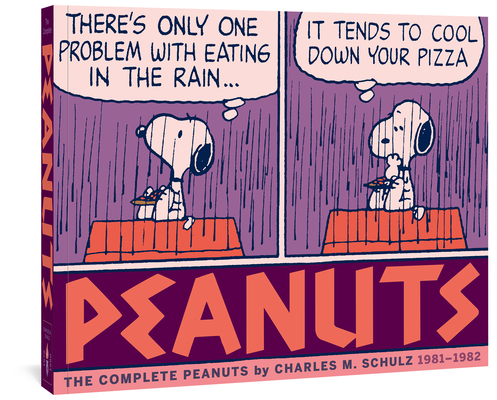 In volume 16 of The Complete Peanuts (softcover edition), Snoopy’s long-lost brother "Marbles" joins the cast of characters — and is baffled by Snoopy’s un-doglike behavior. Charlie Brown lives up to his hard-luck reputation: on the day of the biggest game of the season, he loses the baseball field! In other stories, Peppermint Patty witnesses the "butterfly miracle," Linus and Sally spar over whether he is indeed her "Sweet Babboo," the Van Pelts foray into an ill-fated farming venture, and two of the most eccentric characters from later Peanuts years — the hyper-aggressive Molly Volley and the whiny "Crybaby" Boobie — return for a rematch. Lynn Johnston (For Better or For Worse) introduces this volume.

The Complete Peanuts: 50 Years of Art. 26 Books. The publishing project that launched a renaissance in comic strip publishing: the complete reprinting of Charles M. Schulz’s classic, Peanuts. This is the only place Peanuts has ever been collected in its entirety. Featuring impeccable production values, every single strip is reproduced better than ever before. The series presents the entire run in chronological order, dailies and Sundays, two years per volume, and includes forewords by famous fans and friends of Peanuts.

Charles M. Schulz was born November 25, 1922, in Minneapolis. His destiny was foreshadowed when an uncle gave him, at the age of two days, the nickname Sparky (after the racehorse Spark Plug in the newspaper strip Barney Google). His ambition from a young age was to be a cartoonist and his first success was selling 17 cartoons to the Saturday Evening Post between 1948 and 1950. He also sold a weekly comic feature called Li'l Folks to the local St. Paul Pioneer Press. After writing and drawing the feature for two years, Schulz asked for a better location in the paper or for daily exposure, as well as a raise. When he was turned down on all three counts, he quit.

He started submitting strips to the newspaper syndicates and in the spring of 1950, United Feature Syndicate expressed interest in Li'l Folks. They bought the strip, renaming it Peanuts, a title Schulz always loathed. The first Peanuts daily appeared October 2, 1950; the first Sunday, January 6, 1952. Diagnosed with cancer, Schulz retired from Peanuts at the end of 1999. He died on February 13, 2000, the day before Valentine's Day-and the day before his last strip was published, having completed 17,897 daily and Sunday strips, each and every one fully written, drawn, and lettered entirely by his own hand — an unmatched achievement in comics.

Lynn Johnston, CM, OM (born May 28, 1947) is a Canadian cartoonist, well known for her comic strip For Better or For Worse. She was the first woman and first Canadian to win the National Cartoonist Society's Reuben Award.
Obama, like millions of fans worldwide, recognizes why Peanuts is comics' most truthfully human of security blankets.

If there is one accomplishment in the art of cartooning for which Schulz should be credited, it's that he made comics into a broader visual language of emotion and, more importantly, empathy.
— Chris Ware