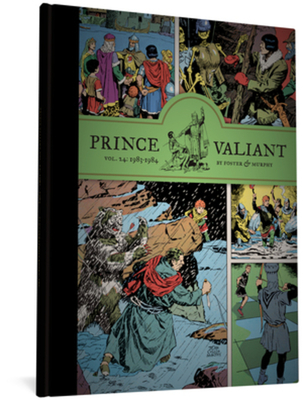 There’s Merlin, Mordred, Maeve, Monsters, and Magic in this collection of the beloved Arthurian newspaper strip!

In Volume 24 (1983-1984), a comedy of mistaken identities culminates in Val playing a game of life-or-death using live people as chess pieces. Arn's job as Arthur's Keeper of Parks involves defending against invading Saxons. Merlin gives Val a magic ring and a dire message for Arn. With all the other knights of the round table away from Camelot on a rescue mission, Val joins a hunt for a cattle-killing man-beast. Finding his opening, arch-enemy Mordred launches an attack on the defenseless kingdom, sending Arthur the severed leg of the mayor of each conquered town. Arn's love for Maeve takes a turn toward heartbreak and betrayal when the identity of her father is revealed.

Hal Foster's Prince Valiant is the most illustrious heroic saga ever written and drawn for the Sunday newspapers. In full, glorious, restored color, this is the finest reproduction of this enthralling, romantic adventure serial ever published.

Cullen Murphy served as managing editor for The Atlantic from 1985–2006 and is currently an editor at large for Vanity Fair. Beginning in the 1970s, Murphy collaborated with his father, John Cullen Murphy, on the Prince Valiant comic strip.