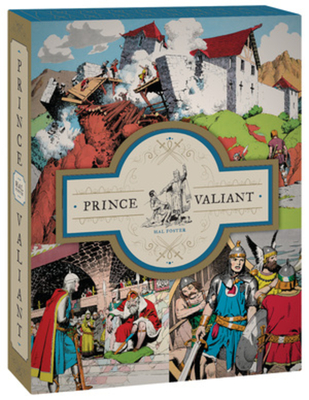 Our series of slipcased gift sets of the beloved Arthurian newspaper strip continues with Vols. 10-12 (1955-1960).

Hal Foster's Prince Valiant is the most illustrious heroic saga ever written and drawn for the Sunday newspapers. In full, glorious, restored color, this is the finest reproduction of this enthralling, romantic adventure serial ever published. This box set contains Vol. 10, in which Aleta is kidnapped, and Val fights famine. This volume also includes an introduction by legendary comics artist Timothy Truman and a special gallery containing more of Hal Foster’s incredible Mountie paintings annotated by comics historian Brian M. Kane. In Vol. 11, Arvak the Red Stallion’s first appearance occurs in this volume of the classically illustrative Sunday comic strip, based on the King Arthur myth. Bonus features include a gallery of Foster’s rare and never-before-reprinted advertising art from the 1920s. There’s a quest for the Holy Grail in Vol. 12. Also, Prince Val is trying to bust Sir Gawain out of jail.