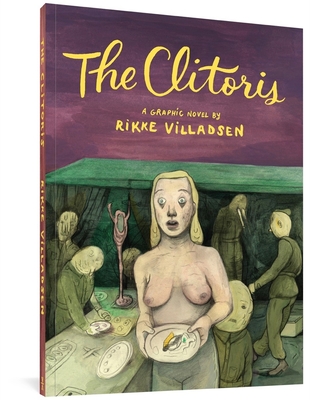 Set in a surreal dreamscape, The Clitoris is a new graphic novel by Rikke Villadsen that explores sexual identity and gender constructions.

A woman has an encounter with a tattooist that leads to pregnancy, and this unexpected event leads her on a journey of self-discovery. Deep in the flickering world of her subconscious, she discovers many potent symbols, poetic wonders, spiritual guides, and strange visions — an opium smoking guru, a Marilyn Monroe performance in Korea in 1954, an homage to Tintin in the Soviet Union, to name a few. Along the way, the protagonist comes to terms with her situation and herself and ultimately accepts what she came from. She hurries back home and reunites with the child.


Rendered in her raw, immediate graphite style, and delving into her innermost fears, desires, and self-doubts, The Clitoris is perhaps Danish cartoonist Rikke Villadsen’s most intimate work to date. A fiercely feminist, playful, ironic, and introspective graphic novel that proves Villadsen to be an undeniable creator to follow in the global comics scene.

Rikke Villadsen lives and works in Copenhagen. Her first graphic novel, The Sea, was published in 2011, followed up with Cowboy (2020) and The Clitoris (2022), each demonstrating Villadsen’s singular, avant-garde graphic and narrative vision. In 2015, she was the first cartoonist to receive the prestigious Danish Art Council Grant, an honor heretofore bestowed upon novelists and poets.