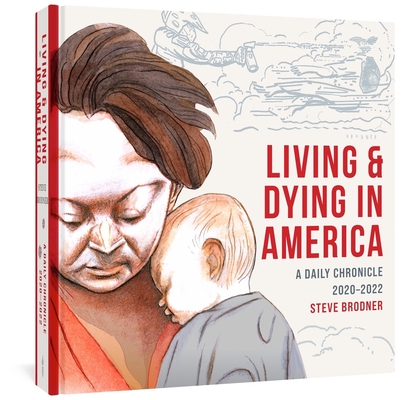 Every day, late at night or early in the morning, from March 26, 2020 to January 1, 2022, the political cartoonist and illustrator Steve Brodner would get to work. In those midnight hours, he would review the day’s reportage, sit down at his drawing board, and memorialize a singular person or event that played a role, willingly or unwillingly, in shaping that day.


Living & Dying in America includes many lovingly drawn portraits of those who died in the pandemic and of those who displayed extraordinary strength, decency, courage, and endurance. But Brodner does not ignore those who perpetuated the pandemic in word or deed: he also etches in acid caricature those public servants and private entrepreneurs who preyed upon the public, spread lies, and aided the virus’ spread through their ignorance, incompetence, and malfeasance. Released via Brodner's daily column in The Nation, the drawings range from quick, expertly realized sketches to elaborate paintings to carefully rendered mixed media, depending on how much time and stamina and inspiration he had left at the end of the day. Each spontaneously drawn or painted image is accompanied by a brief biography of those who died, or a short summary of the person’s conduct or the event depicted.

Taken as a whole, Living & Dying in America is a chronicle of those who died and those who honorably served the living — as well as an indictment of those institutions and political figures who betrayed the public trust. It is a searing and essential moral document, written and drawn on a daily basis with feverish intensity by one of the great forces of American cartooning.

Steve Brodner is an award-winning caricature artist, political cartoonist, educator, and author; publications such as The New York Times, Esquire, and The New Yorker feature his work. The 2011 Gold medal in the editorial category from the Society of Illustrators counts among his many accolades. He currently lives in New York City where he teaches at the School of Visual Arts and the Fashion Institute of Technology.


A working artist for nearly seven decades, Edward Sorel has carried the incisive approach of his early satirical and political cartooning through to high-profile illustrative and caricature work. His distinctive looping, scrawling ink lines and supporting watercolor have since covered and illustrated nearly every major American magazine journal (Esquire, Time, Harper’s, The Atlantic, Forbes) with long residencies at the National Lampoon, the Village Voice, The Nation, Vanity Fair, Penthouse and The New Yorker. He has published over a dozen books of cartoons, comics, journalism, memoir and works for children including a collection of his political comics strips, Just When You Though Things Couldn't Get Worse (Fantagraphics), and his latest book, Mary Astor's Purple Diary (Liveright). He lives in New York City.
An emotionally wrenching and necessary comic. ... These portraits express humanity that large numbers can strip away.
— Booklist (Starred Review)

This sobering gallery of death and greed during the global Covid-19 pandemic from Brodner exemplifies and elevates political caricature. ... Brodner’s portraits of public servants who sacrificed their lives to help others are expressive and compassionate.
— Publishers Weekly

A wrenching moral call to awareness and action that belongs in social sciences, history, and medicine collections and on curricula for high schoolers and up.
— Library Journal (Starred Review)

Living & Dying in America continues a heritage of the artist as witness—yet it transcends that heritage by combining the truth of contemporary ideas with the idealism of contemporary thought.