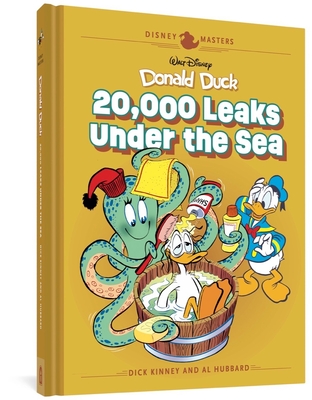 Who lives in a submarine under the sea? Donald’s cuckoo-bananas cousin Fethry, that’s who! He’s roping desperate Don into a two-week treasure hunt on the ocean floor… and a bear-taming trip to Duckburg’s deepest woods—and a mission to cure hiccups with scary rural remedies! Are fame and fortune worth it?

Fantagraphics’ Disney Masters series unearths a treasure trove of previously unavailable comics epics in the grand Walt Disney tradition: expanding the lore of Mickey, Donald, and Scrooge, anthologizing the work of fan-favorite North American talents, and bringing you the best of the acclaimed international artists who have popularized Disney around the world. Rediscover Duckburg… and rewrite history!

David Gerstein is an animation and comics researcher, writer, and editor best known for his work with The Walt Disney Company and its licensees. His published projects include Uncle Scrooge and Donald Duck: The Don Rosa Library (Fantagraphics, 2014-2018) and Mickey Mouse: The Ultimate History (with J.B. Kaufman; Taschen, 2018). He lives in North Carolina.