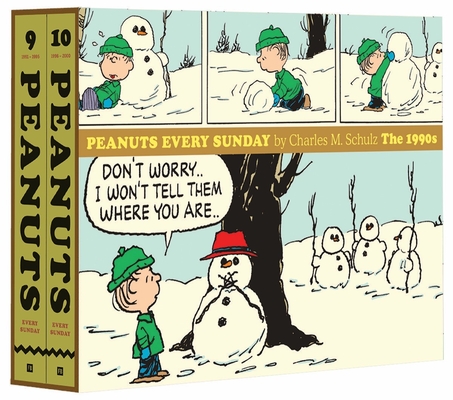 A deluxe box set, showcasing the entire final decade of Schulz's 50-year opus! Peanuts has almost always been collected and reprinted in black and white. But many who read the popular comic strip during its original newspaper run remain fond of the striking, pastel coloring of its Sunday pages, which made for a surprisingly different and fulfilling reading experience. As the 50-year run of Peanuts concludes, all the classic characters — Charlie Brown, Linus, Lucy, Schroder, Sally, Pig-Pen, Peppermint Patty, and Marcie — are present, as is the brightest star of the strip, Snoopy. Collected in gorgeous, oversized coffee table books, the strips in Peanuts Every Sunday have been scrupulously restored and re-colored to look better than they ever have — allowing fans and new readers to immerse themselves in Schulz's timeless masterpiece.

Charles M. Schulz was born November 25, 1922, in Minneapolis. His destiny was foreshadowed when an uncle gave him, at the age of two days, the nickname Sparky (after the racehorse Spark Plug in the newspaper strip Barney Google). His ambition from a young age was to be a cartoonist and his first success was selling 17 cartoons to the Saturday Evening Post between 1948 and 1950. He also sold a weekly comic feature called Li'l Folks to the local St. Paul Pioneer Press. After writing and drawing the feature for two years, Schulz asked for a better location in the paper or for daily exposure, as well as a raise. When he was turned down on all three counts, he quit.

He started submitting strips to the newspaper syndicates and in the spring of 1950, United Feature Syndicate expressed interest in Li'l Folks. They bought the strip, renaming it Peanuts, a title Schulz always loathed. The first Peanuts daily appeared October 2, 1950; the first Sunday, January 6, 1952. Diagnosed with cancer, Schulz retired from Peanuts at the end of 1999. He died on February 13, 2000, the day before Valentine's Day-and the day before his last strip was published, having completed 17,897 daily and Sunday strips, each and every one fully written, drawn, and lettered entirely by his own hand — an unmatched achievement in comics.