The Quest of Ewilan, Vol. 1: From One World to Another (Hardcover) 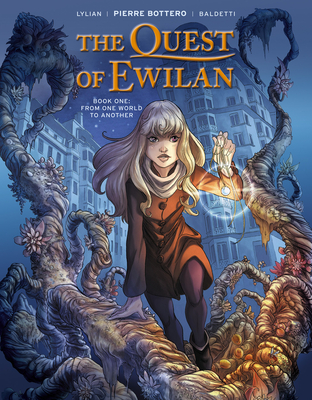 The Quest of Ewilan, Vol. 1: From One World to Another (Hardcover)

This is book number 1 in the Quest of Ewilan series.

In this grand fantasy, 13-year-old Camille's life is forever changed when she and her friend Salim accidentally pass through a portal to a parallel dimension and enter the magical world of Gwendalavir.

There she discovers that she is originally from that other world, and is, in fact, Ewilan, the daughter of two legendary magicians who sent her to our world to protect her from evil forces in the kingdom. From her parents she has inherited a tremendous gift-he power to imaginate, the ability to manifest things by creating mental images of them. As the epic worldwide battle intensifies, Camille hones the skills that might be the decisive weapon in the struggle of her people to regain power and restore freedom and dignity to Gwendalavir.

Pierre Bottero has created a startlingly coherent imaginary universe that recalls the worlds of J. R. R. Tolkein, C. S. Lewis, and Philip Pullman.
Pierre Bottero (b. 1964) grew up Provence, France, where he worked as a primary school teacher before turning to writing full time. He's best known for his Gwendalavir series, made up of four complete trilogies and an unfinished fifth. He died in 2009.

Lylian has been writing comics since 2004 and currently writes several series, both adaptations and original stories.

Laurence Baldetti was born in Nice and studied comics, illustration, and sculpture at the Emile Cohl school in Lyon. The Quest of Ewilan is her first major comics work. She has also created the two-volume Perle Blanche with Sébastien Floc'h.