Codex Black (Book One): A Fire Among Clouds (Paperback) 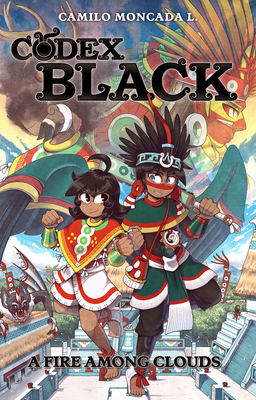 Codex Black (Book One): A Fire Among Clouds (Paperback)


Coming Soon—Pre-Order Now
Navigate through monsters, mysteries, and the will of the gods with two young extraordinary adventurers in fifteenth-century Mesoamerica as they search for a missing father.

Donají is a fearless Zapotec girl who, even though she’s only fifteen, is heralded as a hero by her village. In Codex Black, Donají sets out on an adventure--accompanied by the god that lives inside of her poncho--to find her missing father. Along the way, she meets a 17-year-old winged Mexica warrior named Itzcacalotl, and over time their temporary partnership blooms into an incredible friendship.

The search brings the young pair closer to danger and deeper into mystery than either could have predicted. What exactly was Donají’s father involved with? And how did a simple search for a missing relative lead Donají and Itzcacalotl into a fight with a terrifying bat monster to defend an entire village?!
Camilo Moncada Lozano is an Mexico City-based artist best known for his work on Codex Black, which has garnered hundreds of thousands of views in its original incarnation on Tapas. Along with his work in comics, Camilo is responsible for the 2017 animated short film Donaji & the Magical Poncho.