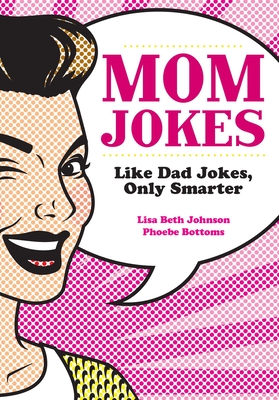 
Special Order—Subject to Availability
Witty, irreverent, and straight from the heart—the mother of all joke books is here to brighten the days of moms everywhere!

Moms need their laughs just as much as anyone, especially when they have to relieve the stress of cranky kids, oblivious spouses, and the challenges of balancing work and family while keeping it all together—at least on the surface! Mom Jokes is a collection of more than 300 snarky, sassy, and witty jokes for moms, such as... From family life and the daily grind to food and entertainment, these one-liners, puns, lists, and real-life tweets will be appreciated by moms everywhere.
Lisa Beth Johnson is a television and comedy writer. After spending years in the publishing industry, she began doing stand-up and writing for The Onion and Comedy Central’s Indecision. Lisa Beth then transitioned into the wonderful world of TV producing. She is a Texan by birth and at heart, but a Californian for weather. For more of her work, follow her on Twitter (@ladybirdj).

Phoebe Bottoms is a comedian, essayist, and screenwriter. She has written for and been featured in several ad campaigns as well as MTV, Cartoon Network’s Adult Swim, SiriusXM, and clubs and comedy festivals around the world. Phoebe currently lives with her husband and too many dogs in Los Angeles, waiting patiently for it to fall into the ocean. For more of her work, follow her on Instagram (phoebebottoms).