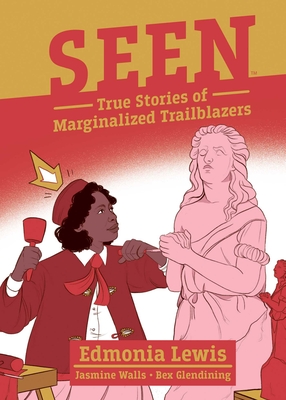 
Not On Our Shelves—Ships in 1-5 Days
The first original graphic novel in a new series spotlighting the true stories of the real groundbreakers who changed our world for the better.

“Sometimes the times were dark and the outlook was lonesome, but where there is a will, there is a way. I pitched in and dug at my work until now I am where I am.”

Meet Edmonia Lewis, the woman who changed America during the Civil War by becoming the first sculptor of African-American and Native American heritage to earn international acclaim.

Jasmine Walls & Bex Glendining present the true story of courage, determination and perseverance through one of America’s most violent eras to create true beauty that still reverberates today.

It’s about being seen. Both for who you are, and who you hope you can become. History is a mirror, and all too often, the history we’re told in school reflects only a small subset of the population. In Seen: True Stories of Marginalized Trailblazers, you’ll find the stories of the real groundbreakers who changed our world for the better. They’re the heroes: the inventors, the artists, the activists, and more whose stories you won’t want to miss. The people whose lives show us both where we are, and where we’re going.