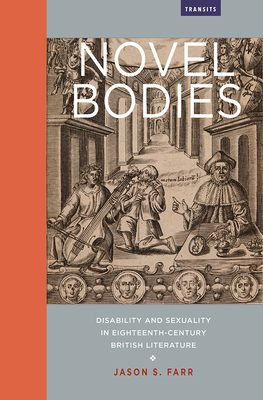 
Special Order—Subject to Availability
Novel Bodies examines how disability shapes the British literary history of sexuality. Jason Farr shows that various eighteenth-century novelists represent disability and sexuality in flexible ways to reconfigure the political and social landscapes of eighteenth-century Britain. In imagining the lived experience of disability as analogous to—and as informed by—queer genders and sexualities, the authors featured in Novel Bodies expose emerging ideas of able-bodiedness and heterosexuality as interconnected systems that sustain dominant models of courtship, reproduction, and degeneracy. Further, Farr argues that they use intersections of disability and queerness to stage an array of contemporaneous debates covering topics as wide-ranging as education, feminism, domesticity, medicine, and plantation life. In his close attention to the fiction of Eliza Haywood, Samuel Richardson, Sarah Scott, Maria Edgeworth, and Frances Burney, Farr demonstrates that disabled and queer characters inhabit strict social orders in unconventional ways, and thus opened up new avenues of expression for readers from the eighteenth century forward.


Published by Bucknell University Press. Distributed worldwide by Rutgers University Press.
JASON S. FARR is an assistant professor of English at Marquette University in Milwaukee, Wisconsin.
“In this extremely lucid, well-researched, and well argued book, Farr uncovers a vast representational landscape of queer disability in which the heteronormative narratives of eighteenth-century fiction are profoundly imbricated and to which they are indebted.”
— Helen Deutsch

“Jason Farr’s Novel Bodies is a rigorously argued and elegantly written account of how eighteenth-century fiction represented the interrelations of sexuality and disability. As Farr persuasively demonstrates, within the pages of both canonical and noncanonical works, queer disability emerges as a narrative force that troubles our understanding of what it means to be ‘normal’ and ‘able-bodied.’ Novel Bodies is an important contribution to disability studies, queer studies, and, more generally, the history of the novel.”
— Paul Kelleher

" Novel Bodies makes a thrilling foray into a number of critical conversations. Its readability reflects Farr's careful articulation of the relation of each chapter to the others and to his primary argument. Scholars of British literature will benefit from Novel Bodies' new perspective on several canonical authors, while scholars of American literature might turn to it to consider how the representations of, and responses to, disability and queerness on which it focuses might have crossed the Atlantic, where many of these works were being read and discussed."
— Eighteenth Century Studies

"Novel Bodies: Disability and Sexuality in Eighteenth-Century British Literature inhabits the fascinating messiness of Georgian-era literary imaginings of corporeal and sexual difference in order to better historicize disability’s formative role in the development of the modern self and its queer relationship to able-bodiedness."
— Journal of Literary and Cultural Disability Studies

"Novel Bodies raises an important intersection that clearly needs more careful attention from our scholarly community: race, sexuality, and disability....Novel Bodies succeeds in the story it wants to tell....By attending to representations of corporealities and sexualities that seem liberating, oppressive, recuperative, and resistant, Farr renders the genealogy of sex and disability in a way that challenges those consequences of the Enlightenment that we are still wrestling with today."
— Eighteenth-Century Fiction

"Farr’s framework, which further upholds form, content, and eighteenth-century social justice assuredly feels like one trajectory forward. In short, for those looking for a model in how to do intersectional work well in the eighteenth century, Novel Bodies fits the bill."
— Studies in the Novel

"This is an important first book that will establish Farr as a major voice in queer and disability studies. Across the manuscript, each chapter is firmly connected to those that precede and follow it. In Novel Bodies, Farr illustrates the centrality of queerness, disease, illness, and impairment to the history of the British novel, the gothic novel, and the long eighteenth century more generally; beyond that, he advances queer studies in significant and compelling ways by advocating inclusive, intersectional analysis."
— Aphra Behn Online

"Farr shows such sanctified realms to be under constant disturbance by figures who do not, will not, cannot conform, and whose resistance signals alternate realities to the ones novels try to sustain."
— Digital Defoe

"While eighteenth-century scholars are familiar with most of these works, Farr reorients our understanding of how disability and sexuality are inextricably linked and how these intersecting categories shape the novel’s form and content....[B]y expanding the definition of disability beyond impairment, Farr deftly makes concrete and comprehensible the degree to which the early novel engages with variably-embodied subjectivity and non-normative desire in inextricable ways that anticipate its own futurity into the present time."
— Eighteenth-Century Fiction (2021 issue)

"This sensitive studies convincingly demonstrates just how ubiquitous is the eighteenth-century novel's engagement with the queer implications of disability, showing how disabled characters mark out alternative possibilities."
— Eighteenth-Century Fiction