Don't Go to College: A Case for Revolution (Hardcover) 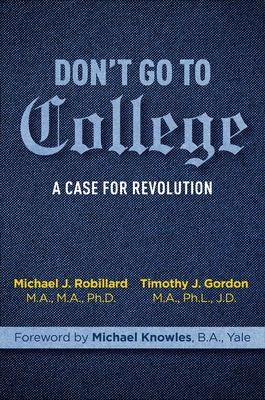 Don't Go to College: A Case for Revolution (Hardcover)


Special Order—Subject to Availability
An examination of how America's colleges have become an intellectual hell on Earth for anyone who wishes to think rationally and seek truth and wisdom, as well as a plan for how young citizens can claim and safeguard the learning and heritage to which they are entitled.

From safe-spaces and trigger warnings, to grievance studies and neo-Marxist indoctrination, to sexual degeneracy and hook-up culture, to student loan indentured servitude, to useless degrees with no translatable real-world application, the modern-day American university now functions as the complete inversion of its original purpose.

Rather than creating civically-minded, competent citizens and adults able to provide for themselves, their families, and their society, America’s universities now function as institutional assembly lines for the production of the new 21st century global citizen-serf: atomized, infantilized, dependent, and pacified.

This book provides the definitive diagnosis of what exactly happened to America’s universities while giving the reader a blueprint for how young citizens, parents, and local communities alike can safeguard, escape, and begin resisting such pernicious indoctrination and illogical woke nonsense.
Timothy J. Gordon studied philosophy in Pontifical graduate universities in Europe, taught it at Southern Californian community colleges, and then went on to law school. He holds degrees in literature, history, philosophy, and law. He was department chairman in theology at Garces Memorial in Bakersfield, California, until being “canceled” for his firm opposition to Black Lives Matter—an unjust firing which took on national notoriety.  Currently, he resides in Mississippi with his wife and six children, where he writes and teaches philosophy and theology.

Dr. Michael Robillard is an independent scholar, philosopher, and Iraq war veteran. He has held prior academic appointments at the University of Notre Dame, the University of Oxford, and the US Naval Academy. His past writings have focused on issues concerning civil/military relations, veterans’ issues, the ethics of automated technology, and free speech in academia. He is also a devout Roman Catholic, an American, and a patriot. He hails from Whitman, Massachusetts.

MICHAEL KNOWLES is the celebrated host of The Daily Wire’s The Michael Knowles Show and PragerU’s The Book Club and the #1 national bestselling author of Reasons to Vote for Democrats: A Comprehensive Guide. Speechless is his first book to contain words.